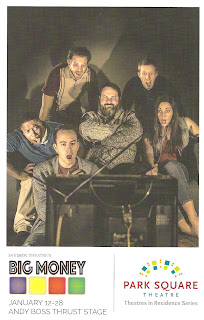 In 1984, a man named Michael Larson won over $100,000 on the game show Press Your Luck. A career con man, he accomplished this by studying every episode of the show and figuring out the pattern in the game of chance at the center of the show. Sandbox Theatre has chosen this stranger-than-fiction true story as the subject of their latest new work. In addition to recreating the infamous episode of Press Your Luck (available on youtube) in all its cheesy '80s game show glory, they explore Michael's personal life and the things he sacrificed in his endless pursuit of the perfect get-rich-quick scheme. The result is a funny, sad, inventive, and fascinating look at genius wasted.

The play is structured as a live taping of a game show, complete with techs running around and an applause sign. Our host Peter Tomarken, a "good-looking nobody with a great smile," (played by Derek Meyer with equal parts charm and smarm) introduces us to contestants: Janie (Sarah Parker, who also effectively plays Michael's wife), Ed (an enthusiastic Eric Weiman), and Michael (an earnest Peter Heeringa). Between scenes of trivial trivia questions and spins on the big board, we get a peak into Michael's life - the cons he's pulled in the past, and the wife and daughter (Emma Larson, a convincing child) who just want him to stop scheming and be with them. Even after the big win, Michael continued with his (mostly illegal) get-rich-quick "plans" (like Alexander Hamilton, he's a man who would never be satisfied). In the end, his obsession with the big win costs him his family and his health.

Sandbox Theatre is a devised theater company, meaning the cast and team (including Derek Lee Miller as project lead and Theo Langason as director) develop the work together (for more on their process, watch the TCTB interview here). It's great fun to watch this seven-person cast (which also includes Cameron Mielicke and Cortez Owens) playfully tell the story. They use physicality to better illustrate certain points or scenes, including an amusing dance describing one of Michael's many "plans." The cast is great at morphing into different characters, and Peter Heeringa injects humanity into Michael that makes you root for him, even as you curse the choices he makes

The design team (including sound and music designer Tim Donahue, lighting designer Heidi Eckwall, and scenic designer Leazah Behrens) have done a great job re-creating the look of Press Your Luck, with flashing squares of color hung across the back of the stage, accompanied by the familiar sounds. The three contestant podiums are also used as various other set pieces when we break away from the game show. Mandi Johnson's versatile and adaptable costumes provide that early '80s vibe (I kinda love Janie's dress and her Farah Fawcett hair), with additional pieces and quick changes helping to differentiate characters.

What do we take away from this story of huge success that leads to an unhappy life?There's no question Michael was incredibly smart and determined. As a statistician, I can only admire his ability to discover the pattern among seeming randomness. That's not cheating, that's being smart, smarter than the creators of the game thought anyone would be. But unlike Henrietta Leavitt, who used her intelligence and pattern-finding skills to measure the universe and advance science (see Lyric Arts' lovely Silent Sky), Michael used his skills to get rich and avoid getting a "real job," like the rest of us. He never found a legitimate outlet for his genius, or work that satisfies. Instead he spent his life chasing the next big thrill, at the expense of his and his family's happiness. Like a beautiful mind gone wrong.