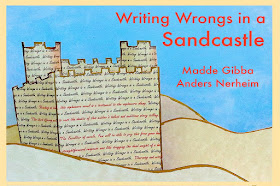 Title: Writing Wrongs in a Sandcastle

Summary: A writer and his publicist/editor are stranded on a deserted island, that's actually really only just down the beach from the resort.

Highlights: I'm not sure how to describe this one, but I found it quirkily funny and delightfully odd. It's got a sort of absurd, surreal quality that takes a minute to get into, but once you do, it's a fun ride. Frieda (the always hilarious Madde Gibba) and Alexander (creator Anders Nerheim, also very funny) are stranded on a beach when they're thrown overboard during a storm. Alexander seems cool with this because he saw the resort just down the beach, but Frieda goes into survivalist mode, convinced they're stranded, and not hearing Alexander's protests to the contrary. With Alexander's help, she proceeds to fashion a spear out of a stick, catch a fish, make a fire, and cook the fish. There are funny little props; lots of conversing about writing, editing, friendship, and totally unrelated topics; and a bratty dolphin puppet named Trixie that taunts them both about their writing. I thoroughly enjoyed this show and it deserves a bigger audience than the one that was there Sunday afternoon. Only two shows remain at Minnsky in Northeast; If you enjoy absurd yet grounded humor, great comedy duos, tiny things, and dolphin puppets, this is the show for you!