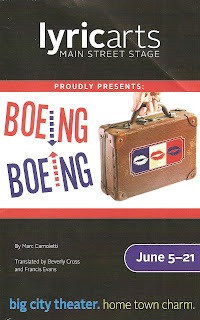 I recently discovered the 1960s French farce Boeing Boeing (along with the rest of the world - it flopped originally on Broadway in the '60s but the recent revival was a hit, sparking many productions across the country). In fact I so much enjoyed Torch Theater's production a few months ago that I was eager to see the play again at Lyric Arts Main Street Stage in Anoka and see their take on it. Even though I knew how things would end up this time, it was still a delight to watch this perfect screwball comedy as brought to life by Lyric's fantastic '60s set and costume design and deliciously campy performances by the six-person comedy. It's light and funny and ridiculous, the perfect summer treat.

Bernard lives in a swanky apartment in Paris with his three international fiances, none of whom know about the other two. He tells his friend Robert, visiting from Wisconsin, that he's able to pull this off due to careful planning and paying attention to the time tables of the women's three airline employers, and of course with the begrudging help of his organized maid Berthe. Everything runs swimmingly and all parties are happy with the arrangement until a perfect storm of weather over the Atlantic and faster planes causes all three women to be in the apartment at the same time. It was bound to happen sooner or later. Bernard, Robert, and Berthe go to great lengths to keep the women apart for as long as they can, which results in lots of physical comedy and door slamming. It's like a shell game trying to keep track of who's in which room. But of course it can't go on forever, and the truth, or some version of it, eventually comes out.*

Director Scott Ford takes his cast right to the edge of campy comedy and they gamely leap off. Ryan Nielson's Bernard is the suave and confident playboy (not unlike his character in Blithe Spirit), until his perfect plan starts to fall apart and he becomes ever more frantic. Kyler Chase plays Robert as a bumbling, nervous schlub who's constantly tripping over the furniture and himself, and Jennifer Inderlee is a hoot as the constantly frustrated and disapproving French maid Berthe. Each of the three air hostesses (Nykeigh Larson as the confident American, Katharine Strom as the passionate Italian, and Jessica Scott as the stern and excitable German) are more over-the-top than the last and are all clearly having fun with the roles. The range of extreme accents are great fun to listen to, although I occasionally had trouble understanding what was being said. This is an intricate comedy, with much coming and going through various doors, physical comedy, and importance in the placement of props to make the jokes work. It's all very well choreographed and the cast pulls it off marvelously.

The fabulous set looks like something from a '60s sitcom - candy colored walls and doors (lots of them); worn wood paneling on the floors, walls, and furniture; modern black leather couches; brightly colored carpet squares; mod lighting; and a super cool inset stereo. The recessed living room (a la Don Draper) allows for much physical comedy as the actors scamper up and down, and they make hilarious use of the bean bag chair. The air hostess uniforms are primary colored perfection, with matching hats and bags. Robert's schlumpy look (even his shoes are scuffed) contrasts nicely with Bernard's polished attire (set by Mark Koski, costumes by Samantha Kuhn Staneart).

With Boeing Boeing, a good time is had by all - characters, cast, and audience alike. Catch this fun summer comedy now through June 21 (discount tickets available on Goldstar), and then make plans for the quintessential summer musical  Grease coming in July and sure to sell out. Because who doesn't love Grease?