"Boeing Boeing" by Torch Theater at the Minneapolis Theatre Garage 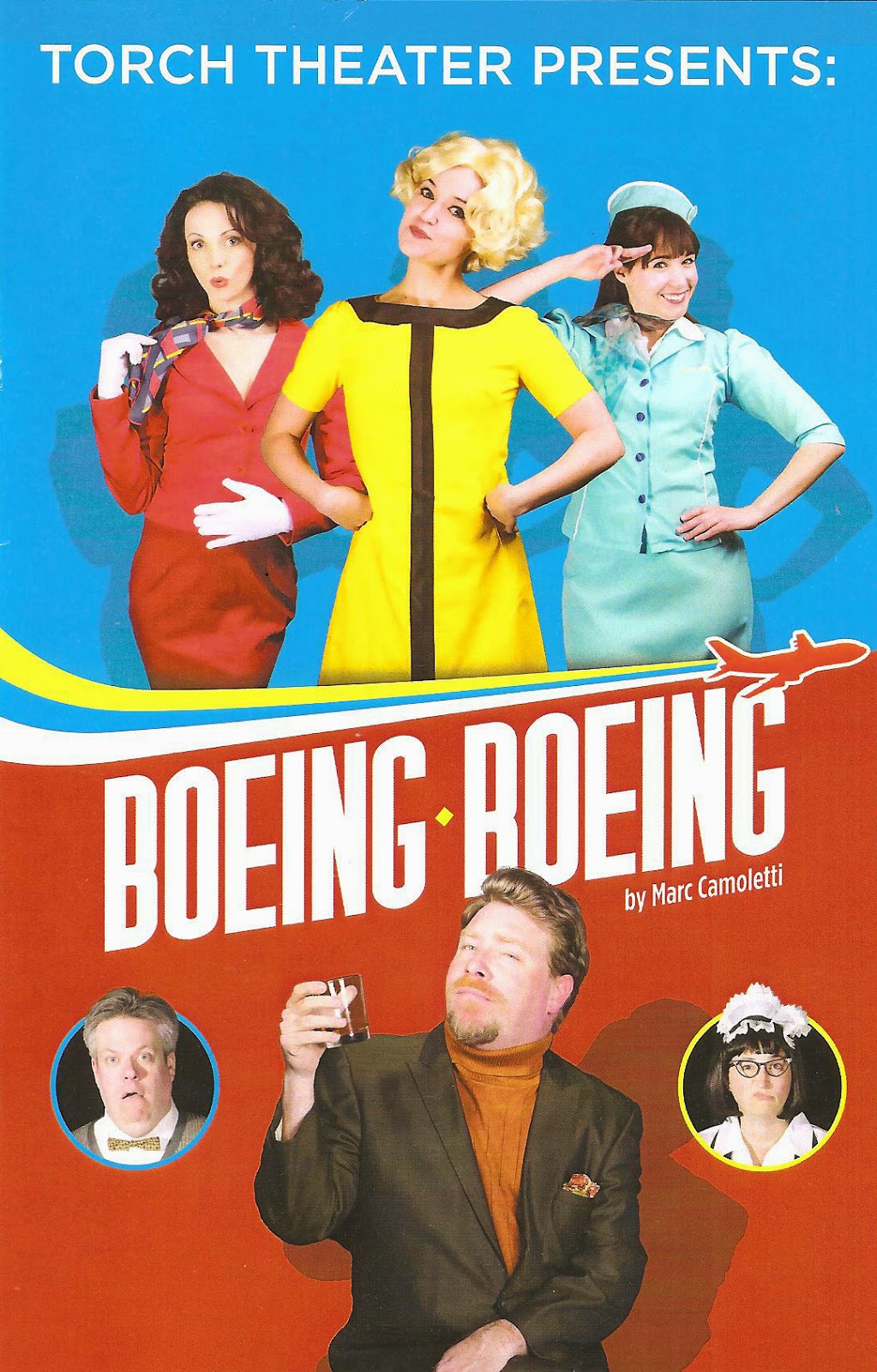 Boeing Boeing is the perfect screwball comedy. Though this tale of an American playboy in Paris with three "air hostess" fiances was a hit in France, the English translation flopped on Broadway in 1965. But the revival over 40 years later was a hit and spurred a flood of regional productions around the country. Fortunately for Twin Cities theater-goers, Torch Theater chose it as one of it's 2015 shows at the Minneapolis Theatre Garage. With a stellar cast, spot on direction, and a swinging '60s vibe created by set, costumes, and music, it's practically perfect in every way (to quote that other big show). I can't remember the last time I laughed so much at the theater!

Bernard lives in a swanky apartment in Paris with his three international fiances, none of whom know about the other two. He tells his friend Robert, visiting from Wisconsin, that he's able to pull this off due to careful planning and paying attention to the time tables of the women's three airline employers, and of course with the begrudging help of his organized maid Berthe. Everything runs swimmingly and all parties are happy with the arrangement until a perfect storm of weather over the Atlantic and faster planes causes all three women to be in the apartment at the same time. It was bound to happen sooner or later. Bernard, Robert, and Berthe go to great lengths to keep the women apart for as long as they can, which results in lots of physical comedy and door slamming. It's like a shell game trying to keep track of who's in which room. But of course it can't go on forever, and the truth, or some version of it, eventually comes out.

I can't decide who in this six-person cast is my favorite; they're each my favorite in different moments. Director Craig Johnson has set the perfect campy tone with precise comedic timing that the cast executes brilliantly. Sam Landman as Bernard is the picture of a cool and confident '60s playboy, until his perfect plan starts to fall apart and he becomes increasingly more desperate. As square Wisconsinite Robert, Zach Curtis* literally throws himself around the set in service of the comedy. Mo Perry's* expressions as put-upon maid Berthe are priceless; add to that her impeccable line delivery and she's quite the scene stealer. And the three air hostesses are all hilarious and fabulous. Stacia Rice (Torch's Artistic Director) is the master of the entrance, making Italian Gabriella's presence known with an arm flung elegantly over her head, her cape and gloves thrown down, commanding attention. As American Gloria, Rachel Finch is smart and confident, walking around the apartment doing exercises and eating her pancakes with ketchup. German Gretchen is embodied by Sara Richardson with her wide expressive eyes, her head cocked perfectly to the side in her short blond wig as she pauses for laughter, sweet one minute and sour the next.

Since the characters come from different countries they all speak in accents, but they're not meant to be realistic. They're the delightfully exaggerated accents of comedy - French, German, Italian - even American Gloria speaks with a tony East Coast accent, and Wisconsinite Robert sounds decidedly Midwestern (read Stacia's thoughts on the accents in this article in the Pioneer Press). Every aspect of the show is over the top, yet somehow you still seem to care about these characters and want to see them end up happy.

Eli Schlatter's set design looks like something out of a '60s sitcom: clean lines, bar stools, black leather furniture, a globe bar, corded phone, and a bright orange bean bag that gets much use. Katherine B. Kohl has created mod faux stewardess uniforms that are to die for, complete with matching hats, coats, gloves, shoes, and what looks like authentic vintage bags from TWA, Alitalia, and Lufthansa. The music playing before the show and during intermission is the icing on the cake, perfectly completing the cohesive '60 theme of the show.

Staging a play from the '60s about a man with three fiances during Women's History Month could be a mistake, but somehow it doesn't seem sexist. It's clear that the women have the upper hands in this polygamous relationship, and they all get what they want in the end. It seems that Bernard really does care for them all, even if he is lying to and manipulating them. And in the '60s, "air hostess" was one of the few careers open to women that allowed them to be independent and travel the world; these women are no pushovers.

Boeing Boeing is a hilarious broad comedy, perfectly executed by the Torch Theater team. If you're looking for a good laugh, go see it between now and April 4 (discount tickets available on Goldstar).


*It's worth noting that Mo Perry and Zach Curtis are doing double duty; they're concurrently appearing as Mrs. and Mr. Capulet in Romeo and Juliet at Park Square Theatre, which is mostly performed during the daytime for students. So it's logistically quite possible, but also probably creates a bit of whiplash going from the great romantic tragedy to this high comedy. On second thought, that probably makes it easier.