"Breaking Up is Hard to Do" at St. Croix Off Broadway Dinner Theatre 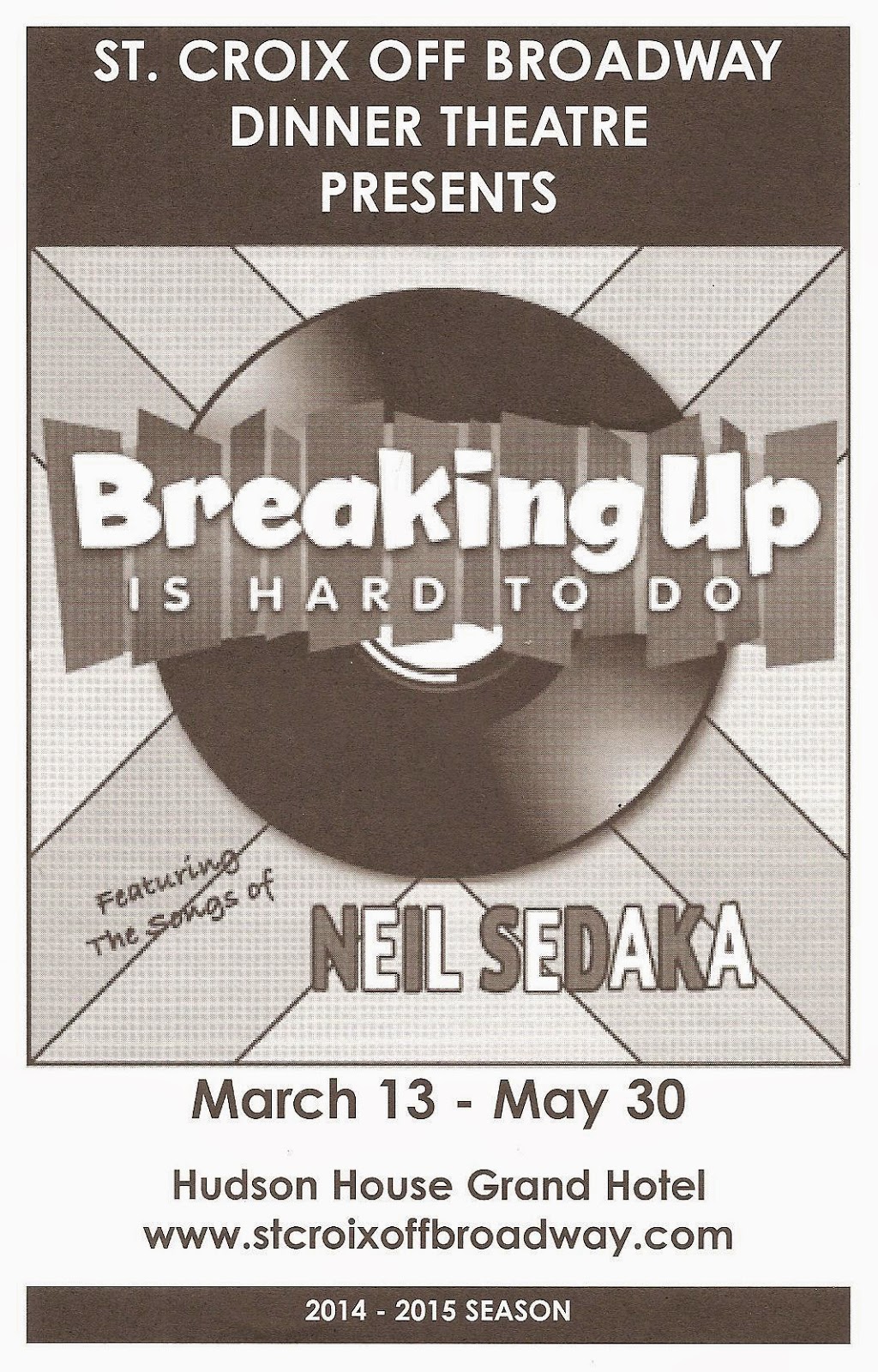 "Theatrical musings in Minnesota and beyond." That's the tagline for Cherry and Spoon, but I rarely venture outside of my beloved home state of Minnesota (except for my annual trip to NYC, the greatest city in the world). But this weekend I paid a visit to our neighbors in Wisconsin, specifically Hudson just across the St. Croix River. Tucked in a ballroom at the Hudson House Grand Hotel is the St. Croix Off Broadway Dinner Theater (way, way off Broadway). The space is cozy, the staff is friendly, the food is pretty good, the cast is enthusiastic, and the show is fun. I'm not sure it's worth the drive from the Twin Cities with the plethora of theater offerings, but if you're in the area you might want to check it out for a pleasant evening of food and entertainment.

Breaking Up is Hard to Do is a jukebox musical featuring the music of singer/songwriter Neil Sedaka from the Brill Building school of music, which also produced Carole King, whose catalog was recently turned into a successful Broadway musical Beautiful. But unlike Beautiful, it does not tell the life story of the songwriter, but follows the Mamma Mia jukebox musical model with a fictional story made up to fit the songs. The story is set in a resort in the Catskills in 1960 (think Dirty Dancing but without the darker storylines about classism and abortion). Instead of Johnny and Baby, we have Marge (Jennifer Jacober) and Lois (Lydia Olson), two young women from Manhattan. Marge has recently been left at the altar, and Lois insisted that the two friends take her honeymoon trip. Lois ensures that her friend has a good time by convincing the charming playboy lounge singer Del (Joe Keith) to woo her and let the two women in his act. It's a big weekend for Del; the TV show American Bandstand is coming to check out Del's music as a potential act for the show. We also meet Gabe (Greg Lund), Del's cousin and resort handyman, Esther (Jessica Breed), the proprietor of the resort, and Harvey (Wayne Peterson), comedian and singer in the show. The girls find out what a cad Del is, and in her rejection Marge sees what was obvious to the audience, that she's more suited to fellow dentist-in-training Gabe. Esther and Harvey's relationship also deepens, Lois gets a job singing at the resort, and everyone lives happily ever after. The plot is pretty predictable and trite, but the charm of the performers carries it through.

A cast of six is about as much as you can fit on this small stage, but they fill it well. Especially good are Lydia as Lois, the stereotypical ditsy blond complete with charming malapropisms; Jennifer as Marge, the stereotypical smart and nerdy girl with glasses who may not win the guy but wins the audience's hearts; and Joe as the smarmy showman Del. They all sound great singing these classic songs - in addition to the title song, the book writers were able to fit in "Where the Boys Are," "Stupid Cupid," "Solitaire," "Laughter in the Rain," and the rousing final number "Love Will Keep Us Together." Lydia and Joe also created fun choreography for some of the numbers.

As I've said before, the one unforgivable sin in musical theater is the use of a recorded track in place of a live band, which unfortunately is the case here. An integral part of musical theater is live music; a recorded track just cheapens the show and distracts from the talent of the vocalists. In addition, the mics of the singers were sometimes echoey, perhaps due to the challenges of the room, further decreasing the sound quality. If they ditched the canned music and had a piano accompanist, and maybe a guitar player and percussionist if they want to get fancy, it would greatly improve the sound of the show and allow the really great vocals of the cast to shine. In that case the cast might not need to be miked in the intimate space, or they could sing into the old-fashioned mic that's used as a prop. (I'm told that the theater does employ live musicians for some of their shows.)

Despite the sound challenges and lack of live music, Breaking Up is Hard to Do is charming and fun and features some classic well loved songs. It continues through May 30.