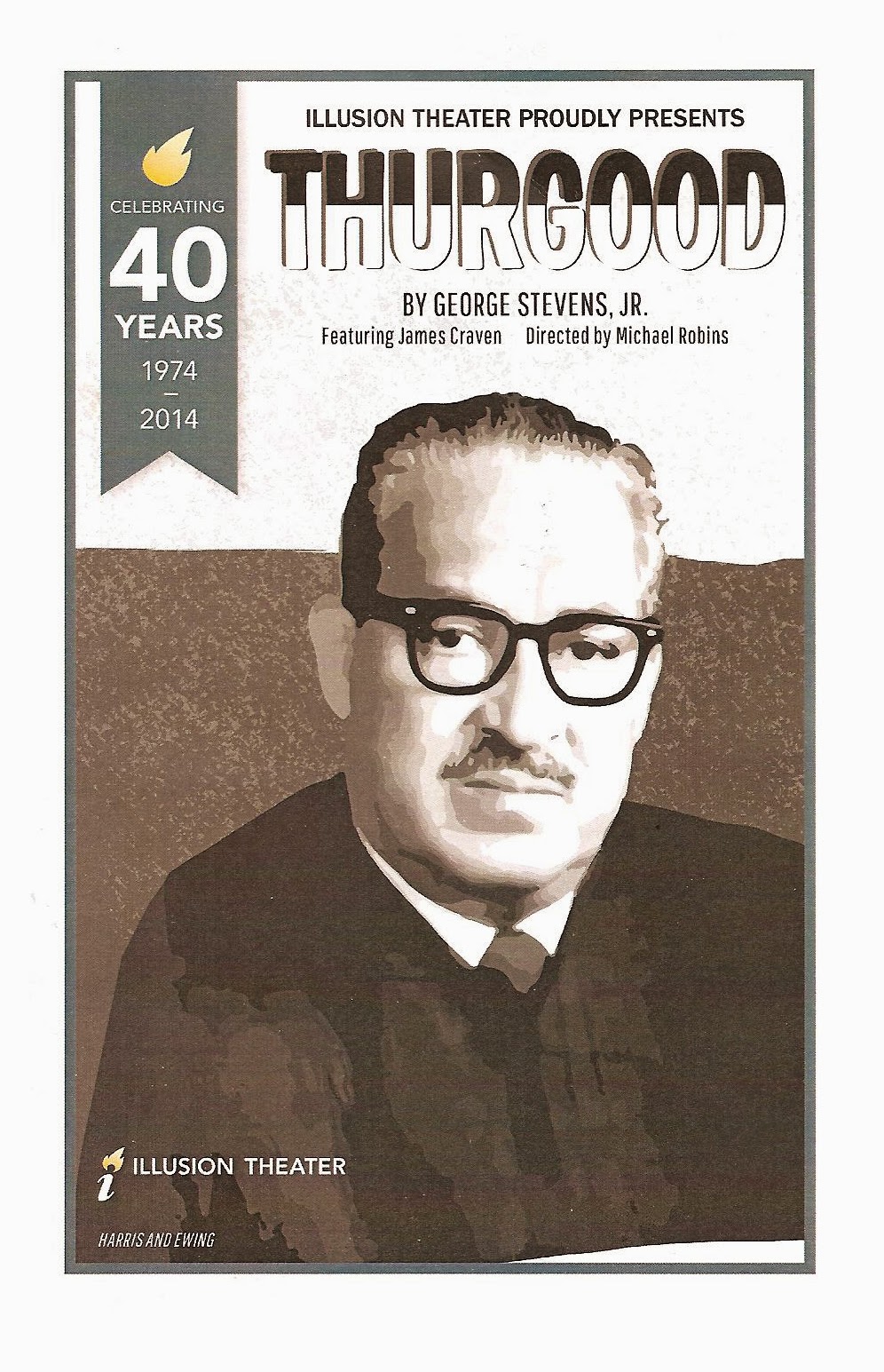 It seems entirely appropriate that on the 50th anniversary of the march in Selma, I attended a play about Thurgood Marshall. While Martin Luther King Jr. was leading people in the community in civil disobedience and inspiring them with his speeches, Thurgood Marshall fought for Civil Rights from the other side, from within the legal system. "The law is my weapon," he said several times during the play, a play that's as much about the man as the public figure, a lawyer who argued many cases before the Supreme Court (including the landmark desegregation case Brown v. Board of Education) and later sat on the Supreme Court. In this one-man play, James Craven inhabits the man in all his humanity and greatness.

The play takes place at Thurgood's alma mater Howard University upon his retirement from the Supreme Court in 1991 at the age of 83. He tells the story of his life, growing up in Baltimore, being unable to attend the law school he wanted to because they did not allow black students, becoming a lawyer and fighting for Civil Rights through many court cases (his most personally meaningful being a voting rights case in Texas, Brown v. Board of Education, and winning a case against the law school to which he was denied entry), joining the staff of the NAACP, and eventually being appointed to the Supreme Court. It's inspirational to hear all of this man's accomplishments and the impact he had on Civil Rights and the legal system.

But this isn't a dry lecture. James Craven brings much warmth, humor, and humanity to the role, so that you see Thurgood as a person instead of just an icon. He relays his grief at his first wife's death, and his joy at finally having children. He tells a few jokes and funny stories, as well as some truly scary ones about traveling the country to remote areas to argue cases. Images projected onto the large screen behind the podium show real pictures of the people and places Thurgood is discussing. And James is such a wonderful actor that it's a pleasure to listen to him speak and watch him walk around the stage with the gait of an 80-year-old man. He doesn't hurry through this long monologue, but lets the story unfold and the weight of it sink in.

I was lucky enough to attend on a day when there was a post-show discussion led by director Michael Robins, who did more than the usual amount of work to find this piece and bring it to Illusion, and Val Jensen of Diversity in Practice, an organization dedicated to recruiting and retaining lawyers of color in the Twin Cities. The discussion was alternately depressing (much of the legislation Thurgood helped put in place is being dissolved) and hopeful (great strides have been made and there are still people willing and able to fight the fight). The beautiful thing about this play, and about what theater can do in general, is that it reminds us of our history and opens a dialogue about issues today.

Thurgood plays for one more weekend only, so get there quick to experience this inspiring man's story on stage.