"Carousel" with the Minnesota Orchestra at Orchestra Hall 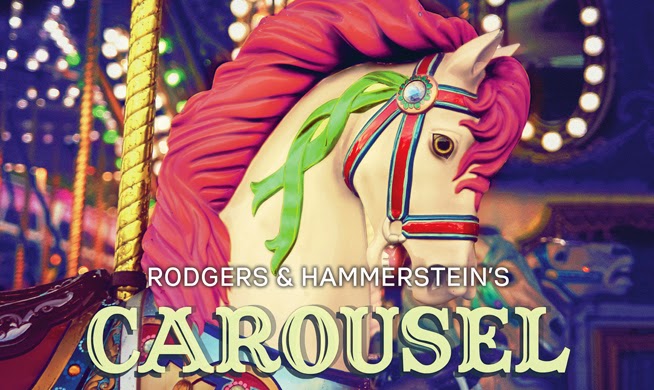 One of the greatest musical theater composing teams, Rodgers and Hammerstein, had a smash hit with their very first show - Oklahoma!, based on the play Green Grow the Lilacs. For their sophomore outing they chose another play, the Hungarian Liliom, and adapted it into Carousel, which was a bit of a gamble due to the darker nature of the story and not-so-happy ending. But the risk payed off; Carousel was another rousing success and ranks among R&H's big five musicals. Shockingly, this musical theater geek has never seen the show in any form or listened to the score, an omission that is and will be corrected by two productions this spring. Bloomington Civic Theatre is doing the show next month, but first up is Minnesota Orchestra's semi-staged production of it with the full orchestra and a large ensemble cast, directed by Robert Neu. I can think of no better way to first experience this classic piece of music-theater than in this musically rich production, where the focus is on the score, which the orchestra and cast beautifully bring to life on the newly remodeled Orchestra Hall stage.

Being unfamiliar with the story, I found in it familiar bits from other works of theater. At first it reminded me of Porgy and Bess, until it turned a bit Our Town-ish in the second act, although it's also not dissimilar to Oklahoma! in some of the characters and themes (imagine if Laurey had ended up with Jud Fry instead of Curly). This is the classic good girl falls for bad boy story, in which the good girl sees the best in the bad boy, and the bad boy tries to be a better person for the good girl, but ultimately fails despite his love for her. In this case the good girl is mill worker Julie Jordan and the bad boy is carnival barker Billy Bigelow. They both sacrifice their jobs to be together, which unfortunately does not lead to happiness for the pair. Because of its themes of poverty and domestic violence, it's a difficult story, one that I have some issues with (including one particularly disturbing line in which Julie tells her daughter it's possible to be hit hard and not feel it - unacceptable), so I'm glad I have a chance to see it again next month and let it sink in a bit.

But now, on to the best part - the music! As a former bank geek (once a band geek always a band geek?), I'm always thrilled to be in the presence of an orchestra, and don't get the chance nearly enough. Our Minnesota Orchestra, conducted by Sarah Hicks, sounds marvelous playing this sweeping melodic score. And the cast, comprised of mostly local talent, is a dream. As Billy, Gabriel Preisser has a gorgeous and resonant voice, and brings out every emotion in the famous "Soliloquy" song. Sarah Lawrence sings beautifully sweet as Julie, and makes us feel her deep love and pain. It's great to see so many familiar faces and voices among the supporting players and ensemble, including the always great Kersten Rodau, Paul R. Coate (overheard in the audience: "Mr. Snow has the best voice"), Kathleen Humphrey, Riley McNutt (providing a bit of comic relief as charming rapscallion Jigger), and Gary Briggle. The finale song "You'll Never Walk Alone" (which I didn't know was from Carousel, or if I did know I'd forgotten it) sends chills down the spine and brings tears to the eyes.

I'm not sure what's "semi" about this staging, other than the absence of large set pieces, which are not missed. The small set pieces (benches, crates, and darling hand-held but almost full size carousel horses) are really all that's needed to hint at the scene, with the dialogue and music and our imaginations doing the rest. There's nothing "semi" about Samantha Fromm Haddow's lovely costumes, which include the working folks' garb, a wide range of carnival costumes, and ballerina Louise's light and flowy dress with matching jacket. Nothing "semi" about the choreography by Penelope Freeh either (who also gracefully dances as Louise), with the ensemble ably performing charming group dance numbers. And the staging makes good use of the area behind and in front of the orchestra.

I now understand what all the fuss is about over Carousel, and I'm glad that this gorgeous production was my first introduction to it. I look forward to getting to know it a bit better at Bloomington Civic Theatre next month. In the meantime, if you can make it to Orchestra Hall this weekend, do so.