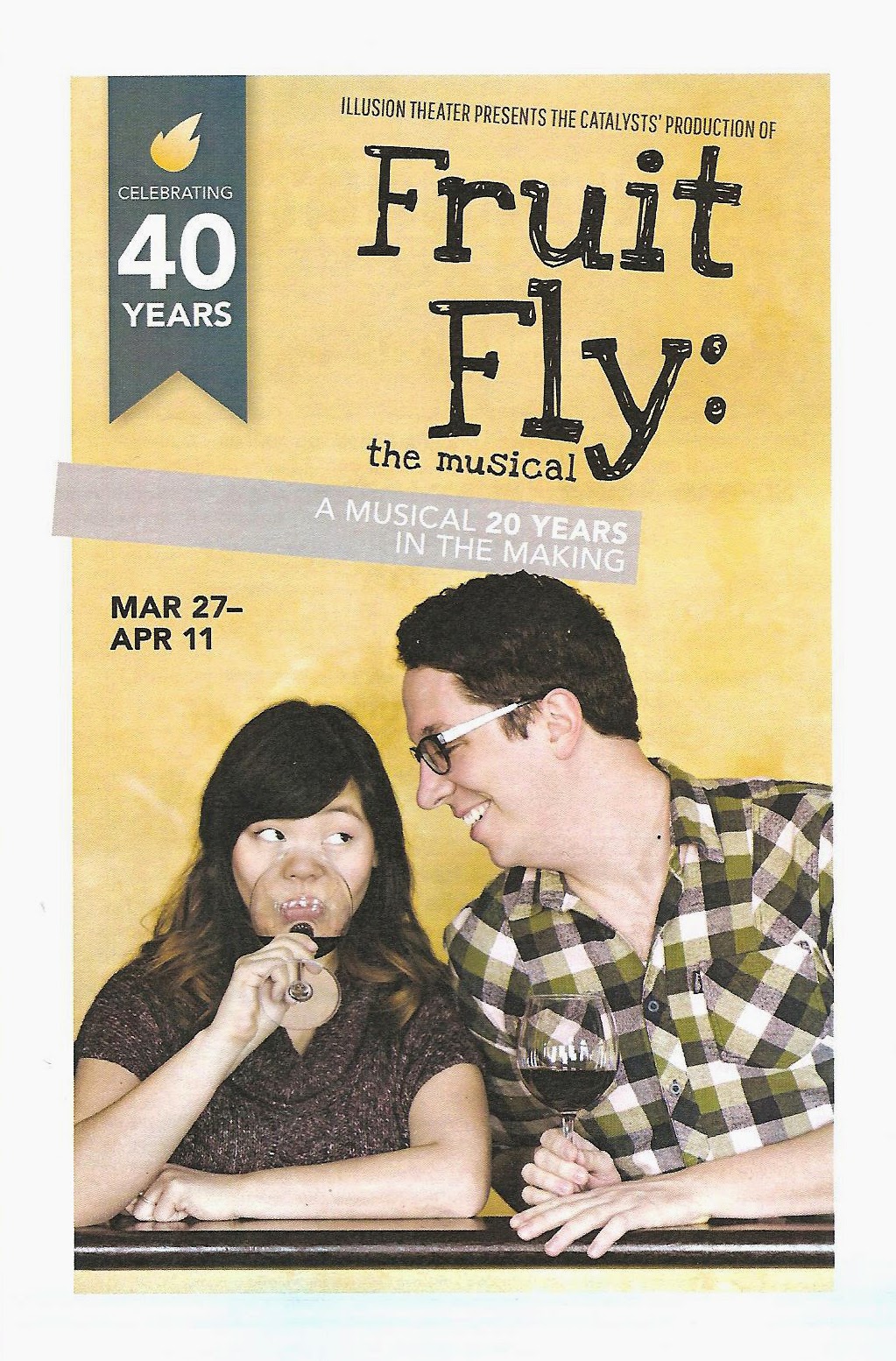 Have you ever imagined your life as a musical? Lifelong BFFs Max and Sheena have done more than imagine it - they've written it! And since in addition to being best friends, Max Wojtanowicz and Sheena Janson are both super talented music-theater artists* (you may know Max from the Children's Theatre and Sheena from numerous production with Mu Performing Arts), the result is a musical that's not only fun and entertaining, but also brutally honest and from the heart. Fruit Fly: The Musical began as a hit Fringe show in 2012 and has had several workshops and readings since, and is now a full-fledged show at Illusion Theater. Each time I see it, it has a bit more depth, but always retains the beautiful, poignant, hilarious, endearing heart that is this real life friendship.

Max and Sheena have been friends for 20 years, which means they met when they were babies. Just a couple of musical-theater-loving kids in the St. Cloud area, singing and acting on stage and off. The story of their friendship plays out on stage and in song in a somewhat fictionalized way, paralleled with gross science facts about actual fruit flies, not the gay man/straight woman kind. We learn that Max hated Sheena when they first met (there's proof!), Sheena asked Max out (and was gently rebuffed) in high school, their moms thought they were perfect for each other, Max told Sheena he was gay before he told his family, the friendship went through growing pains in the post-college years when Sheena started spending time with her new boyfriend and Max got jealous. But these two just can't quit each other, and the real Max and Sheena's love and respect for each other, as well as their easy, natural, charming chemistry, shines through their characters.

Fruit Fly is very meta in a [title of show] sort of way. Max and Sheena are playing themselves but not exactly, portraying their story but not exactly, and it's hard to tell where the real people end and the characters begin. The whole play has a "we're putting on a show, how exciting!" sort of attitude, and at various points they break out of the show to comment on it. It gets pretty intense near the end as their true thoughts and feelings are laid bare, and it feels so real and raw there's a brief moment of "wait, this is scripted, right?"

The show includes 7 or 8 songs, mostly duets but with solos for both Sheena and Max, who both perform the songs with much heart and vocal talent. The fun, clever, fast lyrics** combine well with Michael Gruber's catchy tunes and interesting melodies to create a strong score that stands on its own (dare I hope for a cast recording?). Music director and piano accompanist Jill Dawe has a playful musical repartee with the cast, who are not miked (hooray!). The musical theater references abound in this show about two musical-theater-loving friends. The cast keeps a tally of Sondheim references on the onstage white board, which also adorably diagrams out the scenes and songs in the show.

The best kind of theater is theater that comes from a place of truth, as this show most definitely does. It takes courage to spill your deepest secrets and intimacies of a relationship on stage, but it makes for theater that's so rewarding for the audience, and, I imagine, the creators. Like the aforementioned [title of show], this new musical is a piece that could play on stages around the country with any two actors with the right chemistry. But of course Max and Sheena are the best and most honest Max and Sheena. If you're a fan of musical theater, you really must go see this show that's a love letter to good friends and musicals. Playing now through April 11 at Illusion Theater in downtown Minneapolis (be sure to check out the discount tickets on Goldstar).

*To see more of Max and Sheena's talent and adorableness, check out their monthly cabaret series Musical Mondays at Hell's Kitchen, in which they and their super talented friends sing songs around a different theme each month.
**Listen to Sheena and Max talk about the process of writing a musical about their life on Twin Cities Song Story and Twin Cities Hit Show.