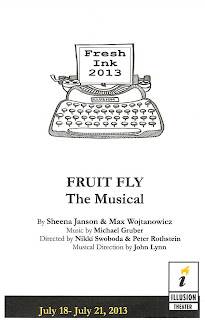 One of my favorite shows at last year's Fringe Festival was Fruit Fly: The Musical, an original and auto-biographical musical about the lifelong friendship between a gay man and a straight woman, written by and starring real-life best friends Max Wojtanowicz and Sheena Janson (with music by Michael Gruber and direction by Nikki Swoboda). I found it to be funny, sweet, and refreshingly genuine. An updated version of the piece was presented last weekend as part of Illusion Theater's new works series called "Fresh Ink" (the series continues this weekend with playwright Jeffrey Hatcher's one-man Hamlet, starring himself). A few changes have been made - Theater Latte Da's Peter Rothstein came on board as a director (which always makes everything better), new scenes and songs have been added, and the part of Sheena Janson is now being played by Cat Brindisi. Despite the changes, it's just as fresh, funny, real, and poignant as I remember it. With clever lyrics, catchy tunes, and an honest and heartfelt story of friendship that everyone can relate to, I think the piece has much more life to it. In a way, casting someone else as one of the original creator/characters proves that the piece works on its own (and if I were casting someone to play me in a musical, I'd pick Cat too!). I see this as a [title of show] - a musical based on the creators' real lives, with the creators playing themselves (or perhaps more theatrical versions of themselves), but that still maintains all its wonderful qualities when other actors are cast as these characters.

Max and Sheena (played by Cat, who smoothly steps in as if she'd been there all along) tell the story of their friendship, from their first meeting in the 5th grade, to the awkward high school years when Sheena's advances are rebuffed, to when Max finally tells Sheena (before his family) that he's gay, to Max's jealousy when Sheena starts spending more time with her boyfriend and less with him. It's incredibly honest and genuine as they reenact some of their most awkward, momentous, and poignant moments on stage for everyone to see. In song! And such great songs - really fast and clever lyrics, with great melodies and catchy hooks. There's the title song (a list song that recites many silly pairs of things), a duet by Max and Sheena's moms who think they're perfect for each other, my personal favorite, "Drinking on a Thursday" (any song that mentions Liz Lemon is a winner in my book), and half a dozen other songs, both solos and duets.

The Fringe version of Fruit Fly was presented in the round, with the main set piece being a round cubby-holed seat-belted table from which various props were pulled. The new version was staged more like a reading, with music stands added to the same table. But rather than ignore the music stands and pretend they're not there, the team cleverly incorporated them as props. Despite being a workshop of a new work, it ran very smoothly. I think it's perfectly delightful and endearing.

I fully expect to see another (even better) version of Fruit Fly: The Musical at some point in the future (and maybe even get the soundtrack to sing along to in my car). Until that time, there's a new Fringe musical by the Fruit Fly team, with the deliciously awkward title of Shelly Bachberg Presents: How Helen Keller and Anne Frank Freed the Slaves: The Musical, playing at the New Century Theatre the first week of August.