"Anything Goes" at Lyric Arts 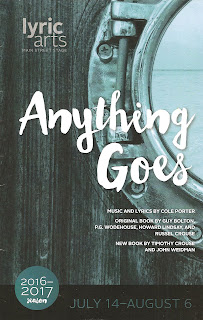 There are a lot of great #TCTheater summer musicals this year (many of whom responded to my #Ham4All challenge - watch all the videos here): the Ordway's fan-freakin-tastic Jesus Christ Superstar, the gorgeous Sunday in the Park with George at the Guthrie, the recently closed infectious new musical Fly by Night at the Jungle, Old Log Theatre's better-than-Broadway Ghost the Musical, History Theatre's third run of the smash hit Glensheen, and the super fun Grease continuing at the Chanhassen through the fall. Here's another one to add to the list (especially for those of you who live on the north side of town) - Lyric Art's ebullient production of the Cole Porter classic Anything Goes. A wonderful cast, that catchy and familiar score, hijinks and humor galore, and tap dancing! It runs through August 6 so if you can get tickets (Lyric Arts' musicals sell well), I recommend a visit to lovely Anoka to see this great summer musical. Just one question remains - can they #Ham4All?

If you're not familiar with this classic musical, which has aged moderately well in 80+ years with several book revisions, the basic premise is one of celebrities, rich people, and gangsters all trapped together on a ship from New York City to London. Showgirl Reno Sweeney is in love with good-natured Wall Street man Billy Crocker, who is in love with debutante Hope Harcourt, who is engaged to Lord Evelyn Oakleigh. Billy stows away on the ship to try to prevent Hope from marrying Evelyn, and a couple of gangsters are also on board trying to hide from sight. When Billy is mistaken for "Public Enemy Number One," he's treated like royalty, which is fun for him, but Hope is not impressed. Billy confesses and is immediately put behind bars along with the gangsters. But this is a musical, so they escape and everyone gets married, which obviously means a happy ending for all.

Director Scott Ford has assembled a fantastic cast of Lyric favorites and newcomers. In the latter category, Jaclyn Juola as Reno is a wonderful addition to the #TCTheater scene and I look forward to seeing more of her. She's brash and funny with great vocal control and a commanding stage presence. Familiar face Ty Hudson is a charmer as Billy Crocker, and another newcomer, Elizabeth Cassidy (a recent graduate from my alma mater with a double major in math and theater - my kinda girl!) is de-lovely as Hope. Kyler Chase is hysterical as Lord Evelyn, stealing scenes and working every comedic moment. Robert Zalazar is a natural as gangster Moonface Martin; Rachel Hudson is a hoot as fellow gangster Erma (and if she were a little blonder, could be mistaken for Kristin Chenowith); and Jessica Scott is expressive and funny as Hope's mother, despite being too young for the role (it saddens me to see actors with fake silver in their hair, especially women, because I know it means taking another role away from a woman over 40). The entire ensemble is wonderful, especially the adorable sailor quartet (James Ehlenz, Armando Ronconi, Alex Johnso, and Josh Palmquist).

The two best features of this musical are the score (featuring songs that have since become classics in the American songbook, e.g., "I Get a Kick Out of You," "You're the Top," and "It's De-Lovely") and the dancing. The former is well-played by Mary Cay Stone's orchestra and sounds great (despite the orchestra being piped in from a room upstairs due to backstage space constraints). The latter, while perhaps less elaborate than the recent Broadway revival and tour, is entirely satisfying. The iconic tap dance to the title song is a thrill, and choreographer Lauri Kraft keeps the movement going even through scene changes. In the post-show discussion, she said that the scene changes were inspired by the recent Broadway tour of An American in Paris, and that influence shows. Actors in costume move the scenery between scenes, and often do a little dance or character bit while doing so.

I was happy to hear at the talkback that the director and cast thoroughly discussed the implications of the "dated racial portrayals" in the show, namely how the two Chinese characters are depicted and how the white characters impersonate them. They did what they could to minimize the offensiveness, while acknowledging that this is a product of its time, and encouraging the audience to laugh at the stupidity of Moonface and Billy rather than the stereotypes. I appreciate their attention to this issue; often old scripts have offensive material that needs to be rethought for today's world. More diversity in the large cast would have made this point even more and resulted in a more modern and representative production.