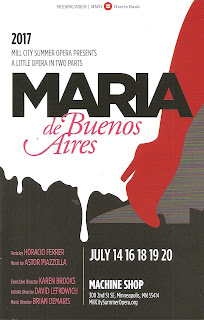 For the past five years, Mill City Summer Opera has performed an opera outdoors at the Mill City Museum Ruins Courtyard, a stunning location in which to experience opera. This year the Courtyard is under construction, so they made the best of the situation and are instead performing in a historic building across the river, an event space called the Machine Shop. For this small indoor location they've chosen a 20th Century, three-person, small orchestra piece, in contrast to their usual classical, large cast, full orchestra pieces. The opera is perfectly suited to the space (and reminds me a bit of what Skylark Opera has been doing lately), and the experience, while different than outdoor opera in the Ruins Courtyard, is just as thrilling. On a hot and steamy summer night, Maria de Buenos Aires is a hot and steamy little opera that is positively hypnotic in its poetry of sound and movement.

As director David Lefkowich explained before the show, Maria de Buenos Aires is more poetic and lyrical than realistic and literal. Most opera is to some extent, by definition of the art form, but in this case we're really free to enjoy the beauty of the music, performances, and dance as it affects the heart and soul, without too much left brain involvement. The final performance is tonight and it's virtually sold out (see rush ticket info here) so you're likely out of luck. They'll hopefully be back at the Courtyard next year, but I quite enjoyed the diversion into this little gem of an opera.

So what is this show about anyway? I asked myself before the show. That's like asking, what is poetry about? I don't usually know, but that doesn't mean I can't appreciate the beauty of it. To be technical, Maria de Buenos Aires is about a woman named Maria living in Buenos Aires, not surprisingly. But beyond that, I'm not really sure what it's "about." There's a tragedy, although I'm not quite sure what it is. Maria dies, and comes back as a ghost, or maybe she's just pregnant and gives birth. There is much Catholic imagery in the lyrics (75% of Argentinians are Catholic), with references to that other famous Maria/Mary. And like poetry, layers and layers of meaning and interpretation that I can't even begin to unpack. But the characters and emotions come through strongly via the music, movement, and words displayed on several TVs around the space, which read like poetry.

Much of the cast and creative team is from Central or South America, including several from Argentina, which adds a level of authenticity to the production. Milton Loayza plays the narrator and although I don't think he sings, it almost seems like he does because his speaking voice is so melodic and expressive. Luis Alejandra Orozco plays several men who come in contact with Maria, with a commanding presence and dreamy baritone voice. But the star of the show is Catalina Cuervo as Maria, who inhabits all the highs and lows of emotions as this strong, beautiful, tortured woman, and does it most of it in a stunning red sequined dress that I would wear to the Iveys if I could wear it half as well as she does (costume design by Christopher Verdosci). All three of these performers are absolutely captivating, as are the eight local dancers who tango in and out of the show (choreographed by Fernanda Ghi). None more so than my favorite dancing couple, Megan McClellan and Brian Sostek, whose dancing I can never get enough of.

The music of the opera is gorgeous with a distinct Argentinian sound. Conductor Brian DeMaris leads the 11-piece orchestra, which includes JP Jofre playing the bandoneon (sort of a small accordion) like another character in the story. It would be entertaining and emotive and moving as a concert piece alone, but add in the dancing and singing and performing, and it's quite a night.