"Jesus Christ Superstar" at the Ordway Center for the Performing Arts 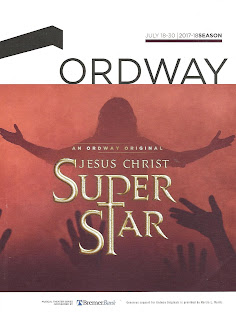 The Ordway's recent string of excellent locally produced Broadway sized musicals continues with the popular Andrew Lloyd Webber/Tim Rice rock opera Jesus Christ Superstar, and it's fan-freakin-tastic. Unlike the Ordway's last original, West Side Story, Jesus Christ Superstar is not one of my favorites; I've only seen it once before and never really listened to it (although I vaguely recalled singing a song from the show at a Catholic grade school concert wearing a t-shirt with an awesome '80s iron-on decal). So I went into the show last night with mostly fresh eyes. I still think the piece is a bit weird (the heavy story of the life and death of Jesus, with a comic number and a disco thrown in), but there's something kinda fabulous about it. And the number one reason to see the show at the Ordway is this mostly local cast that is absolutely spectacular. The show is completely sung through, most of it at full volume, and everyone in the lead and featured roles just knocks it out of the park. And every member of the 30+ person ensemble (including several sweet-singing children) completely gives it their all. Notably, this cast is racially diverse (including an African American Jesus*), a beautiful example of color-conscious casting by the Ordway. At this moment in time when our country, our world, is more divided than ever, it's heart-warming to celebrate an inclusive, loving community of diverse peoples. And isn't that what Jesus taught, before his message was distorted, used, abused by institutional religions? Not exclusion but inclusion, not us vs. them but the idea that we are all one, we are all special, we are all worthy of all the bounties that life has to offer.

This show is big (although it's a quick two hours including intermission, it feels epic), and the Ordway's production is bigger. The cast is more populous than some small towns in Minnesota, and feels like a busy (but not chaotic) community. The focus of the story is the Jesus/Judas relationship, with Judas portrayed as a conflicted man who loves Jesus but disagrees with his methods, and doesn't realize the gravity of his actions until it's too late. This is as much Judas' story as it is Jesus' and the Ordway has found two equally strong actors to play them. Out-of-towner Jesse Nagar is a true find, creating a sympathetic character and with a voice that goes from soft and lovely to all-out wailing. His "Gethsemane" threatened to stop the show with applause. His counterpoint, Judas, is played by #TCTheater artist Randy Schmeling, who finally gets his shot at the spotlight on the big stage after many years of performing in smaller roles or on smaller stages, and he couldn't be better or more suited to this role. We know he can rock out (see also Power Balladz), and he certainly does that here, right up to the moment of his (spoiler alert) shocking death. But he also breathes such life into this tortured man whose name has become a synonym for betrayal, making us feel for him and see Judas as more than just the bad guy in the story.

There's really only one role for a woman in this show, Mary Magdalene, and another out-of-towner, Lauren Villegas, truly impresses in this role. She brings a humanity to Jesus, and her "I Don't Know How to Love Him" is a sweet and lovely moment in the show. But there's one more woman featured, thanks to some creative casting*. The fabulous Erin Schwab once again proves that there's nothing she can't do in the realm of music/comedy/performance by playing King Herod in one all too brief but wildly entertaining number. Other highlights in the cast are Terance Reddick as Simon, with one fantastic song, James Ramlet as Caiaphas (wearing a beard befitting his powerful voice), and Dieter Bierbrauer as Pontious Pilate, looking like Caesar himself and showing the conflict within the character as he sentences Jesus.

I might complain about the music being a bit too loud, but this is a rock opera so that's expected and appropriate. Music director Andrew Bourgoin leads the 16-piece pit orchestra that makes all the different styles of music sing. Director and choreographer James Rocco (in addition to keeping this large cast and big story moving along clearly and crisply) has given this talented ensemble plenty of high energy fast dancing to do, and they ably comply. The title song, coming near the end of the show, is a highlight (it may feel a bit out of place with the '70s-tastic costumes and disco feel right in the middle of a death scene, but just go with it). This moment is perhaps only topped by the ending, with some truly stunning effects that create a breath-taking image (Paul Whitaker designed the lighting and the versatile multi-leveled set).

This fabulous production of the popular rock opera Jesus Christ Superstar continues at St. Paul's Ordway Center for the Performing Arts through July 30.


*The Ordway is offering the following "Ordway Extra" discussions in conjunction with this production (more info here):

Wednesday, July 19: "King Looks Like a Lady" - Intersections of Gender, Power, and Performance
Wednesday, July 22: Is There a Significance to Casting a Black Actor as Jesus?