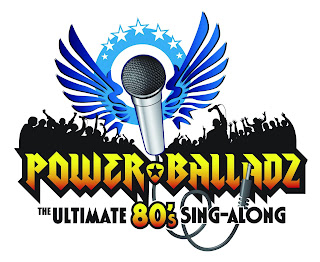 As I've said before, I'm not a fan of 80s music. But what I am a fan of is Dieter Bierbrauer and Randy Schmeling singing anything together, especially in a show with Peter Rothstein's* name attached. I've had a few samples of this show that they first did at the Lab Theater in 2009, but I've never quite been able to catch it (I even had tickets to the Off-Broadway version in 2010 before they cancelled certain performances, which worked out because I ended up seeing this instead). Dieter and Randy are currently reprising their roles in Power Balladz on tour, along with the third original cast member, Katy Hays (whom I've never seen before but who is equally fabulous). The show will play at the Chanhassen Dinner Theatre's Fireside Theatre the first weekend of every month through May, along with several other stops around Minnesota and the country. I was definitely in the minority in the audience; most of the audience was made up of fans of the 80s (some of whom appeared to still be living in the 80s) and were there to hear their favorite songs, not to listen to their favorite musical theater actors. But we all seemed to enjoy it just the same, although for different reasons. All three performers are incredibly talented vocalists as well as actors, creating distinct (if not very deep) characters - Dieter, the rock scholar with a PhD; Randy, the high school dropout who never quite grew up; and Katy, the rock fan and groupie. The show is interactive, with people being invited onstage to participate in games (Lyric Challenge, Meatloaf or Meat Loaf) and to vote on a medley of songs whether or not they qualify as a "power ballad." It's not high art, but it's a really entertaining evening, whether you're going to see great performers or relive your youth.

A few highlights of the show:


Whether you long for the days of big hair and melodramatic rock ballads, or you're a theater geek who loves to see talented singer/actors throw themselves into a performance, check out Power Balladz at the Chanhassen March 1-2, April 5-6, and May 3-4, or visit out the tour page to see if the show is coming to a town near you. Here's a video montage of scenes from the 2009 version of the show, which is pretty similar to the version currently on tour (except for the crazy costumes):


*I spotted Peter Rothstein, one of the creators of Power Balladz and Artistic Director of Theater Latte Da, in the audience the night I attended. It gave me a chance to tell him how much I enjoyed Latte Da's most recent show Aida, and all of his work. Next up: I'm looking forward to seeing what Peter and the fabulous local cast has done with the hot new play Other Desert Cities opening this week at the Guthrie.