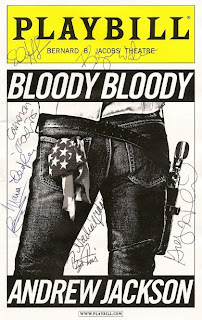 Bloody Bloody Andrew Jackson is a bloody brilliant musical! It’s everything I want musical theater to be: original, challenging, engaging, thrilling, thought-provoking, hilarious, and with a rocking score. This is not your grandmother’s musical, nor is it for kids. But if, like me, you love the art form that is musical theater and believe it can and should make a strong statement about the world we live in, it’s just what the doctor ordered.

Walking into the Jacobs Theater, we knew we were in for an awesome experience. I’ve never seen a theater decked out like this. It was red. Everywhere, everything, red. There were strings of red lights covering the ceiling and walls, which made everything a bloody glow. Portraits of President Andrew Jackson adorned the walls, as did (hopefully faux) animal heads. And in the middle of the theater, hanging upside down, was a dead horse! (I’m glad I didn’t have a seat directly below that.) It set the tone for the evening, and when the actors walked on stage, the lights went down and the show began.

Bloody Bloody Andrew Jackson tells the story of the seventh president of the United States of America, from his humble beginnings on the frontier of Tennessee, to “hero” of wars against the Spanish, English, and Indians, to the White House. It’s a “period piece,” but with many modern conventions, language, and anachronisms, including microphones, phones, video games, and even a Cosmo magazine. It’s a wonderful mishmash of current popular culture and history, which makes it easy to draw parallels between the story that’s being told about the early 19th century, and our own time.  The show is a political satire that illustrates just how much things haven't changed.  Even though the musical has gone through several years of development, the subject is very timely and some of the jokes refer to events in recent weeks.  I have a feeling they'll continue to add and tweak jokes to reflect the political scandal du jour.

Andrew Jackson has dreams of overthrowing the Washington “elite” and becoming “the people’s president,” but he soon discovers that a president has to make the hard decisions, and is never going to please everyone. “The president doesn’t have the luxury of having friends.” One of the things Jackson is most known for is “Indian removal,” having convinced many Native American tribes to sign treaties and move west, resulting in the infamous Trail of Tears. As the narrator (a hilarious woman in an ugly sweater and glasses, riding a scooter) said, historians are still debating whether Jackson was a hero or a genocidal murderer.

The cast is gorgeous and talented, dressed in a sort of pioneer/modern/hip wardrobe. The action is largely over the top and campy, and a heck of a lot of fun. The score is what they call “emo-rock” and is great to listen to; I’ve been singing “Populism, Yea, Yea,” and “Life sucks, and my life sucks in particular” all day! The band consists of a drummer and two guitar/keyboard players, who also at times function as characters in the action. The choreography was cool and edgy. The show reminded me a little of the equally brilliant Spring Awakening (which I’m going to see in November at the Orpheum Theatre in Minneapolis, go see it if you’re interested in a great modern rock musical). Both are set in a specific time in the past, but the themes easily translate to today. The rock score and use of hand held mics is also similar, but Spring Awakening has a more somber tone, where BBAJ is pure campy fun and dark humor. I hope this show receives the acclaim and success that Spring Awakening did.

After the show we waited at the stage door to talk to the actors. You can tell it’s a new show (it officially opens on October 13 after a few weeks in previews and a successful run at the Public Theater downtown earlier this year).  There wasn’t any organization to the stage door and the actors seemed quite pleased to sign our playbills and chat with us. For many of them, this is their Broadway debut. The entire cast is marvelous; it really is an ensemble piece with everyone playing several parts. I especially enjoyed Bryce Pinkham (who appeared recently at the Guthrie in A View from the Bridge) who plays both Indian chief Black Fox and Henry Clay, a creepy ferret-holding politician. Jeff Hiller (who's appeared on such NY based TV shows as 30 Rock, Guiding Light, and Ugly Betty) is a scene stealer in all of his many roles, including the mentally challenged John Quincy Adams and the White House tour guide. The title role is played by Benjamin Walker with strength, vulnerability, humor, a little wackiness, and a whole lot of charisma. He truly is a rock star president in tight jeans! He was very pleasant and friendly at the stage door and happily posed for a picture with us. Unfortunately he’s engaged – to Meryl Streep’s daughter Mamie Gummer!


If you’re in NYC or planning to be there anytime soon, go see this show. It’ll blow you away, make you laugh, and make you want to cry at the messed up state of politics 200 years ago and today. And maybe it’ll even get us thinking about a better way to do things. It’s encouraging to me that this show is on Broadway at the same time as Scottsboro Boys. Both shows deal with unpleasant periods in the history of our country and the horrible way we’ve treated people, and still are. Original musical theater as social commentary? I’ll take that over Spiderman the Musical any day!