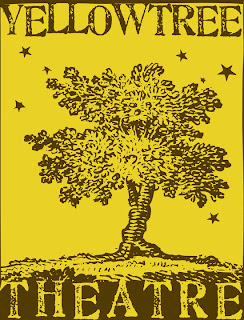 I've had a busy week. I saw three shows in four days: a touring production of the 80s rock musical Rock of Ages, Theater Latte Da's sublime Evita, and last night I saw what may be my favorite of the week: an original play called String at Yellow Tree Theatre in Osseo. It's definitely the one that made me laugh the most, and touched my heart the most. What more can you ask for from theater?

If you've never been to Osseo it's worth a visit. Only a few miles from the consumer mecca that is Maple Grove, when you're in downtown Osseo you could be in any small town in Minnesota. There's the butcher shop, the barber shop, the mom and pop diner, a great Thai restaurant, and a lovely wine bar and bistro (OK it's not like every small town). So when I heard about this theater, now in its third season, I was curious to check it out. It's in a strip mall not far from downtown, and doesn't look like much from the outside. But once you get inside, it's a warm and inviting space with a cozy lobby (with a tree in it, of course) and an intimate little theater. Yellow Tree was founded by husband and wife team and native Minnesotans Jason Peterson (Artistic Director and actor) and Jessica Lind (playwright and actor). They moved to New York for a few years after college, but soon realized Minnesota might be a better fit for what they wanted to do. "We were living in New York and were sitting on this gorgeous play," said Jason in an article in the local press. "It became a pipe dream to start our own company and produce String ourselves. That dream morphed into wanting a permanent home for our work, and that's how Yellow Tree was born."

String was written by Jessica and is a romantic comedy. But not in the bad Katherine Heigl movie kind of way, more in the quirky indie movie kind of way. Raina, played by Jessica, is the epitome of the "English major" that Garrison Keillor always jokes about. She wants to be paid for writing poems despite everyone telling her that she should get a job teaching high school English. But she wants more out of life. Ryan, played by Jason, is the pizza delivery guy whose car breaks down outside her house, so he has to come in to use the phone. She continues to run into him, and despite the fact that she's dating a man who seems perfect for her on paper, she can't seem to get Ryan out of her head (or her dreams). Meanwhile, her sister, the delightful Jessie Rae Rayle, is struggling with a new marriage and trying to start a family. When Raina receives flowers and a poem, she assumes it's from her medieval literature professor boyfriend. But she soon finds out that the pizza delivery guy is the one who wrote her the beautiful poem (which inspired the name of the theater):

If I am not the right one, there has never been an ocean.
A yellow tree never grew where it grew.
The sun never exchanged places with the moon.

At one point Raina describes a poem she's writing as something like, "it's about breaking free of the strings that hold us down, while coming to terms with them." That's a great way to describe this play, too. Jessica and Jason have great chemistry, and Jason's Ryan is an utterly charming goofball. I don't understand why it took Raina as long as it did to fall for him! I guess it's those strings and expectations she had to break loose of first. 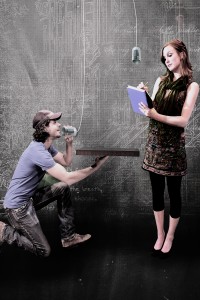 I was really taken by the set design, it's an innovative use of the small space. The apartment setting has a chalkboard wall behind it that opens up to reveal a second floor bedroom, or a sign for the cafe. By the end of the play it had transformed into a train station with a single bench. I also really loved the music they played between scenes. If it were a movie, I would have bought the soundtrack. Instead I came home and listened to the Garden State soundtrack, which has a similar feel and even one song in common - Simon and Garfunkel's "The Only Living Boy in New York."

It's obvious this theater and this play are a labor of love. It's a great find (thanks Vicki!) and I'm excited to go back. They've got a great season ahead of them which includes the classic American play Our Town (which I've never seen) and the musical [title of show].

I'll leave you with this quote from their website:

"We at Yellow Tree Theatre have this dream. We see the people of this community gathering together and getting excited about theatre. We see our theatre as a meeting place where everyone feels welcome, an artistic venue where people of all ages and walks of life can mingle together. Maybe we’re a little romantic, maybe this sounds like a crazy convoluted idea, but we’re okay with that. We like crazy."

Now if you'll excuse me, I have to go order a pizza.