"Rock of Ages" at the Orpheum 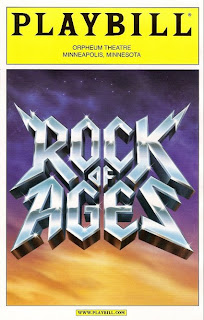 Rock of Ages is an 80s rock jukebox musical and the first show of the Broadway Across America season at the Orpheum Theatre in Minneapolis (which also includes Billy Elliot, Shrek, my recent obsession Hair, Jersey Boys, and West Side Story).  Friends, I have a confession to make: I don't know 80s music.  And what I do know, I'm not a big fan of.  Yes, I was a teenager in the (late) 80s, but I didn't listen to music; I spent most of my time watching TV and doing homework.  ;)  So I didn't know much of the music in this show, except when they would get to the chorus of a really popular song, or anything that's been covered on my favorite TV show Glee (or as I like to call it, a theater geek's TV dream come true).  Of course knowing the music isn't a prerequisite to enjoying a musical, but in this case I think it might have helped.

Like most jukebox musicals, the story was pretty thin.  Boy meets girl, boy loses girl, boy gets girl.  Girl wants to be an actress but instead becomes a stripper.  Boy wants to be a rock star but instead joins a boy band.  The usual stuff.  But what I like about the show is that it doesn't take itself too seriously.  The character of Lonny, an energetic and entertaining Patrick Lewallen, also serves as narrator.  He often breaks the fourth wall to talk about the show, at one point reading from a book called "Musical Theater for Dummies" about how to end the first act (the answer - jazz hands).  It's a cute little wink to the fact that they're not trying to do high theater here, they're just trying to entertain.

The strong cast is led by Constantine Maroulis, who originated the role of Drew on Broadway and was nominated for a Tony.  I was a fan of Constantine when he was on season four of American Idol, and had seen him as Roger in a touring production of RENT before his Idol days.  I can see why he was the first Americal Idol contestant to be nominated for a Tony.  His Drew is sweet, vulnerable, awkward, and completely adorable, and his voice is perfectly suited to the screaming rock anthems and bombastic ballads of the 80s.  And he still knows how to work the crowd.  His leading lady, Rebecca Faulkenberry, has an equally strong voice, and their duets are powerful.  The characters are pretty broadly drawn stereotypes which the cast fills out gamely.  MiG Ayesa plays rock star Stacee Jaxx with a powerful voice and some freaky muscle definition, and Casey Tuma gives hippie protestor Regina energy and spunk.  There were a few too many scenes in a strip club for my taste, but for the most part it was an entertaining evening, which had me on my feet and singing along (to the Glee theme song "Don't Stop Believing") by the end of the evening.

Someone behind me said "It's like Mama Mia but with rock."  I thought that was a very astute observation.  If you long for the 80s, or are looking for a fun, silly, entertaining evening, this show's for you.  Personally, I prefer ABBA to 80s music, but it's the same general idea.