"Spring Awakening" at the Orpheum 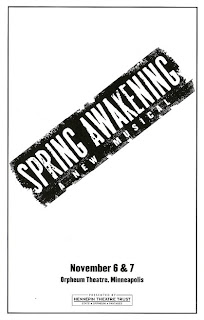 This is how much I love the musical Spring Awakening: I named my kitty Moritz after my favorite character.  Fortunately my Moritz doesn’t share too many traits with his namesake.  He is sweet and loveable, and a bit of a rascal, but he’s not nearly as tortured and lost as Moritz of the musical.  The life of a cat is much easier than the life of a teenager coming of age in late 19th century .  Or anywhere and at any time, for that matter.  That’s what this show is about: how difficult and frustrating and wondrous it is to grow up.
Spring Awakening opened on Broadway in December of 2006 after a successful run off-Broadway, and went on to win eight Tony Awards, including Best Musical, Best Book, Best Score, Best Choreography, and Best Direction.  The original cast included John Gallegher Jr., who won the Tony for his portrayal of Moritz, as well as future Glee stars Lea Michele and Jonathan Groff.  The musical Spring Awakening is based on the late 19th century German play of the same name (Fruelings Erwachen in the original German) by Franz Wedekind.  In some ways it's a big ad for sex education, because it deals with the destruction that can result when kids aren't told the truth, and don't have an outlet for their feelings and experiences.  Melchior (MEL-ki-or) is the popular and confident boy who thinks he has it all figured out, until he finds out he doesn't.  Wendla is the girl who loves him and ends up pregnant, in part because her mother refuses to tell her the truth.  "Mama who bore me, mama who gave me no way to handle things, who made me so bad."  Moritz is the troubled misfit who sees no way out of the confusion he's in.  He sings my favorite song (and one of my theme songs), "Don't Do Sadness."  Perhaps I relate to this show about angsty teenagers more than a 30-something-year-old woman should, but we all have a bit of the teenager in us, don't we?

Despite dealing with such heavy issues as teen pregnancy, child abuse, and suicide, Spring Awakening is also a fun and spirited rock musical.  It's a period piece with period costumes, but the characters whip out hand-held mics to belt out modern-sounding rock tunes.  I first saw in on Broadway the year after its Tony wins.  The original cast was mostly intact, with the exception of Tony-winner John Gallegher Jr. (who's currently starring in American Idiot on Broadway).  His replacement, Blake Bashoff (aka Karl on Lost), also gave a phenomenal performance.  Lea and Jonathan were riveting together and individually (one of the many reasons why I love Glee is that they reunited Melchi and Wendla in my living room week after week!).  The show has an amazing youthful energy and makes you feel everything along with the characters.  Here's a clip from the Tonys with the original cast and slightly toned-down lyrics:


This is the second time I've seen the show on tour; this time it was only a two-night engagement. Despite the limited number of performances, the set was mostly unchanged from what I've seen before (with the exception of the hanging platform). A few lucky audience members get to sit on the bleachers onstage with the cast (someday I'm going to figure out how to get those seats!). This production features a young and talented cast. Every part was really well cast, they all played and sang their roles very well.  Coby Getzug was adorable and tragic as my poor sweet Moritz.  The applause after the song "Totally F**ked" was perhaps the longest applause I've ever heard in middle of a show; it went on for several minutes.  And well deserved, it's an energetic song (and a great song to sing in the car to relieve the stress of the day ;).  The cast came out for an extra bow at the end; the audience clearly enjoyed the performance.

To paraphrase a song from the show, "We've all got our junk, and my junk is theater."  Lucky for me I'll get another fix in just two days when I see 39 Steps at the Guthrie!