Idina Menzel with the Minnesota Orchestra at Orchestra Hall 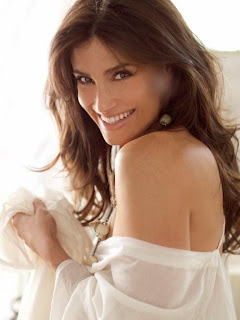 Idina Menzel has had a finger in three of my favorite musical theater pies - she was in the original casts of my favorite musical RENT and the phenomenon that is Wicked, and she had a recurring role on Glee, aka a musical theater geek's TV dream come true! And she featured all three of them in her concert with the Minnesota Orchestra, led by conductor Sarah Hicks, as well as some classics and original compositions.

Idina captured the audience as soon as she walked onstage in her gorgeously draped purple dress, long loose dark hair, and bare feet (if there's one thing I admire more than a fabulous pair of shoes, it's bare feet!). She said she first performed in bare feet when she threw her back out lifting her 14-month old son Walker Nathaniel Diggs, and realized she could sing better that way. She was continually fidgeting with her dress because there was a pin left in it from the dry cleaners, which is just one example of how real and normal she was up there on stage. There was a sign language interpreter on the side of the stage that she was continually fascinated with. Every time she said an interesting word, like bitch or breast pump (did I mention she was real and relaxed?), she'd look over to see how he translated it. It was a running joke throughout the evening.

In addition to entertaining the audience with stories about her career and growing up on Long Island, she of course sang many familiar songs. Idina won a Tony in 2004 for her fearless portrayal of Elphaba, aka the Wicked Witch of the West, in Wicked. The first Wicked song she sang was my theme song, "I'm Not that Girl," and later in the evening she sang Elphie's signature song, "Defying Gravity." It was a thrill to her her do it live after hearing it so many many times on the soundtrack. Towards the end of the concert she did her thank yous, and then put her mic down, waiting for silence. I just knew she was going to sing something "unplugged," which is always my favorite moment of any concert. When the words came out of her mouth and filled Orchestra Hall, they brought instant tears to my eyes.


It well may be that we may never meet again
In this lifetime so let me say before we part
So much of me is made from what I learned from you
You'll be with me like a handprint on my heart.
And now whatever way our stories end
I know you have rewritten mine, by being my friends!

It was her personal thank you to the audience, and the second time I teared up that evening; the first was when she sang a gorgeous rendition of "No Day but Today" from RENT. Idina was nominated for her first Tony in 1996 for her portrayal of Maureen. She spoke about how the show changed her life in many ways, not the least of which was dealing with the death of creator Jonathan Larson the night before the show opened. She said that at a time when all the success and acclaim and attention could have gone to their heads, it was really all about communicating Jonathan's music and message to the world, because he no longer could. No day but today. Idina had the audience sing the refrain back to her, which was magical.

A few years ago Idina sang "Don't Rain on My Parade" for Barbra Streisand when she was honored at the Kennedy Center Honors, and told a funny story about her interaction with Ms. Streisand at the after party. She sang "Funny Girl" for us (which she also did on Glee), followed by "Don't Rain on My Parade." If there really is going to be Funny Girl revival on Broadway, I vote for Idina playing the role of Fanny Brice rather than Lea Michele. I love Lea, but she already has a steady gig and I'd really love to see Idina back on Broadway.

Idina has a couple of solo recording available, in addition to the cast recordings of RENT and Wicked. I just downloaded a 6-song EP that includes live versions of "Defying Gravity" and "No Day but Today," as well the original song "Gorgeous" which she sang at the concert. She also did a song that she wrote for her son with her husband, actor Taye Diggs (who was also in the original cast of RENT and currently appears on ABC's Private Practice). It sounds like they have a lot of fun singing to Walker around the house. Oh to be a fly on that wall!

Idina talked about her role on Glee, and her initial horror at being asked to play the mother of a 24-year-old! But she had just had a baby and was happy to be working again. When she read the script and saw that the reunion song between her character and her daughter was Lady Gaga's "Poker Face," she was a little confused. But someone it all worked! She sang the song for us with full orchestra accompaniment.

Idina's encore song was "Tomorrow" from Annie, which was a song her parents used to ask her to sing when she was a little girl. She sang it for her dad, who was in the audience. And with that, she was back on a plane to Los Angeles. I was so happy to spend 90 minutes with someone who's had such a huge role in many of the musicals I love. I hope to see her again someday, perhaps on a Broadway stage!