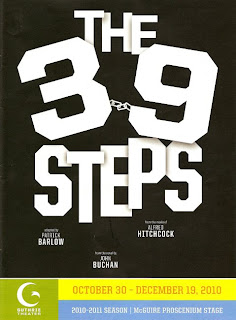 The 39 Steps is a wild, zany, fun ride of a show. It's broad slapstick humor, with the cast of four playing dozens of characters. They clearly have as much fun as the audience, almost cracking themselves up at times. I saw the show this spring Off-Broadway in New York and loved it, so I was excited to see it at the Guthrie with this fabulous local cast. Set in 1935 England and Scotland, the play is based on 1935 Alfred Hitchcock movie of the same name. It's a spy story, but the story is really mostly an excuse for the crazy antics that surround it.

The main character, Richard Hannay, is a bored English gentleman who suddenly gets involved with a spy and goes on a cross-country adventure, trying to save England from some unknown evil. Robert O. Berdahl is perfect as Richard; he has the suave elegance, raised eyebrow, and dark wavy hair to bring him to life. Robert is a regular at the Guthrie, most recently playing Macduff in the bloody great spectacle that was Macbeth. But my favorite memory of him is at the Guthrie cabaret a few years ago (which they're not doing this year, boo!) when he sang Tom Waits' song "Waltzing Matilda." It was achingly beautiful and made me kick myself for not seeing his show Warm Beer Cold Women a few years ago. I can only hope he'll reprise it sometime.

Richard's love interests were played by Sarah Agnew, another Guthrie regular (most recent: Dollhouse). She was very funny as the German spy Annabella Schmidt; the simple farm wife with the unfortunate overbite Margaret; and Pamela, the woman who unwillingly gets pulled into Richard's spy life and ends up falling for him. She has great comedic chops and reminds me a little of Molly Shannon in her expressive face and the way she throws herself physically into the characters.

All the remaining characters were played by Luverne Seifert and Jim Lichtsheidl, who are credited simply as "clowns." And so they are. A sort of Laurel and Hardy comedy team, they played cops, paper boys, spies, innkeepers, farmers, even natural elements like puddles and the wind! With the simple change of a hat or donning of a coat, combined with a new accent, they transformed into a completely different character. I've seen both of them do this sort of thing before. Luverne Seifert was in Ten Thousand Things' brilliantly sparse production of My Fair Lady earlier this year, in which he played several characters, including Eliza's father (get me to the church on time!). Jim Lichtsheidl is one of my favorite local actors. He has a great physicality about his acting, and is able to completely transform himself through the tilt of his head, a gesture of his hand, or the cadence of his speech. He starred in the one-man show Jacob Marley's Christmas Carol at Park Square Theater last year; a retelling of A Christmas Carol in which he played all of the characters in the story. He also appeared in Tiny Kushner, a collection of short plays during last year's Kushnerfest at the Guthrie, and in one of the plays he portrayed dozens of different characters. It was truly amazing to witness. So this play was right up his alley.

The 39 Steps is a fun and thrilling show with a top-notch cast. If you go, and you should, be prepared to laugh a lot and forget about the worries of the real world, as you're immersed in the wacky world of Richard Hanney and the dozens of characters who fill the stage, in the bodies of four mere mortals.