"Life's A Dream" by Ten Thousand Things at Open Book 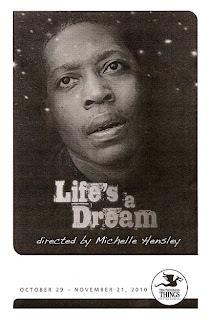 I attended my first Ten Thousand Things production, My Fair Lady, earlier this year. I've been hearing about them for years, but just hadn't gotten to a show. After that first show, I was hooked, and bought a season pass for this year. If you've never seen a TTT production, it may be a bit jarring at first. They perform in an open room with almost no set, simple costumes, and full lights. The actors look you in the eye as they deliver their lines a few feet in front of you. The reason they perform like this is because their main focus is to bring theater to people who don't usually have the opportunity to go to the theater - people in prisons, homeless shelters, and treatment centers, for example. "Because theater is richer when EVERYONE is in the audience." For those of us fortunate enough to be in the position to go to the theater, they also hold public paid performances, but they perform in the same style as they do for their less fortunate audiences. It's theater unlike I've ever experienced it before. With no distractions, it's all about the acting and the piece. And they use some of the best actors in the community (and apparently also draw some of the best actors to the audience: I spotted Sarah Agnew from 39 Steps at the Guthrie across the aisle from me!).

But on to the show at hand: Life's a Dream. With mistaken identities, women dressing as men, kings and princes, prophesies from the stars, and swordfights, it felt a little like a Shakespeare play. It was written around the same time, although not by Shakespeare, but by Spanish playwright Pedro Calderon de la Barca. King Basilio of Poland receives a prophesy before his son is born that he will cause destruction to the land. When Sigismund is born, Basilio has him imprisoned in a tower, where he grows up and lives his life, never knowing who he is. When it comes time for Basilio to name an heir, he decides to give his son a chance to defy fate. He is brought to the palace unconscious and given one day to prove himself a worthy king. If not, Basilio will take him back to the tower, where he will wake up and be told it was all a dream. From which comes the central theme of the show: Is life a dream? And if so, what should we do with that dream, when we know it could be over at any moment?

The cast is wonderful. Dennis Spears plays King Basilio as an elegant and powerful man anyone would gladly follow. Namir Smallwood is his son Sigismund and makes you feel every bit of his torment, rage, and hope. Elise Langer is the comic relief as Clarion the clown, and Maggie Chestovich is Rosaura, the scorned woman who goes on a quest to win (or kill) her love and find her father. She's a spitfire who wields a sword and wears a pretty party dress (check out Maggie's blog to find out more about the places they've performed the show).

The next TTT show is Doubt starring Kris Nelson and Sally Wingert - the Meryl Streep of the Minneapolis/St. Paul theater scene, fresh off of her Broadway debut in La Bete. A must see in my book, as is the last show of the season, Man of LaMancha. If you want to see theater in its purest form, unencumbered by elaborate sets, fancy costumes, or dramatic lighting, go see a Ten Thousand Things show. If you believe in the power of theater to change the world, or at least to make one person's life a little better, support Ten Thousand Things in the work that they do.

Life’s brief
So let us dream.
Let’s all remember
that we must wake up when we least expect it.

Celebrity Sighting
I saw Sarah Agnew sitting in the audience across the aisle from me, watching the play.  She's currently appearing in the uproarious 39 Steps at the Guthrie, where she was doing two shows that day.  In between shows she ran across Washington to take in a little theater.  I ran into her at the bathroom and couldn't resist telling her how much I loved the show, and that I didn't know how the cast didn't crack themselves up every night.  She said they did!