"The Scottsboro Boys" at the Guthrie Theater 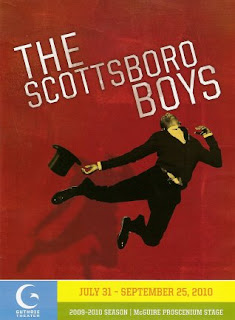 I just got home from seeing The Scottsboro Boys at the Guthrie Theater, and am listening to the soundtrack as I write this. It’s a brilliant new musical by John Kander and the late Fred Ebb, and we get to see it here in Minneapolis before it moves to Broadway this fall. It’s funny, disturbing, thought-provoking, moving, and filled with great music and choreography (Susan Stroman directed and choreographed the show). The majority of talented cast will be heading to Broadway with the show, one exception being David Anthony Brinkley, frequent member of the cast at the Chanhassen Dinner Theatres, as the Interlocutor (sadly, John Cullum, aka Holling Vincoeur on my favorite TV show Northern Exposure, did not make the trip to Minnesota). Colman Domingo and Forrest McClendon play Mr. Bones and Mr. Tambo, fixtures in the minstrel show and comic relief, and several other characters. The nine talented actors and dancers protraying "the boys" are led by Joshua Henry, who gives a beautiful and heart-breaking performance as Haywood. The youngest of the boys really was a boy – 13 years old and played by the adorable Jeremy Gumbs.

The Scottsboro Boys is the final show of the 2009-2010 Guthrie season in the McGuire Proscenium Stage. My season seat in this theater is in the front row, which is actually the cheap seats because apparently the first row is “too close,” which doesn’t exist in my world. When I got to my seat I was excited to see that there’s an actual pit with an orchestra (before I was a theater geek, I was a band geek, performing in the pit for two shows in high school). The music is wonderful and remiscent of Kander and Ebb's other great shows, Cabaret and Chicago. The set design for this show is really interesting; it mostly consists of mismatching dining room chairs painted silver, moved around and put together in different configurations to represent a train, a bus, a jail cell, and a courtroom.

The show is structured as a minstrel show, telling the true story of nine black men who were accused of raping two white women in Scottsboro, Alabama in 1931. They were convicted and sentenced to death in a sham of a trial, just a few weeks after they were accused. The appeals and trials lasted for six years, going all the way to the US Supreme Court. The show illustrates what these young men went through to find justice, and challenges us to rethink our own ideas.

The Scottsboro Boys is the kind of show that gives me hope for the future of musical theater; in an age where every other show on Broadway is a TV or movie adaptation, this is an original piece about a unique and important story. I don’t want to jinx anything, but I wouldn’t be surprised to see several Tony nominations and wins for this show next year. As Guthrie Theater Director Joe Dowling wrote in the program, “If, as I strongly believe, Oscar Wilde was right when he said that theater is ‘the most immediate way in which a human being can share with another the sense of what it is to be a human being,’ then The Scottsboro Boys teaches us about ourselves and our history while reminding us of these nine young men whose ordeal deserves to be remembered and commemorated.”