"Where's My Tony?" at Hennepin Stages

Last night I attended a fun show that celebrated, while poking gentle fun at, musical theater. Where’s My Tony was a one-night-only show written and hosted by local actors Whitney Rhodes and Joshua James Campbell, both of whom appeared in Theater Latte Da’s The Full Monty last fall. They presented ten “alternate” Tony Awards, followed by a performance by one of the songs from the winning show. Whitney and Josh were great hosts, both very funny with great voices, and with a good chemistry between them. What I loved most about this show is that even though it was sponsored by the Hennepin Theater Trust and featured the big Broadway touring musicals that have passed through the Hennepin theaters, it also spotlighted several talented local artists and their upcoming projects at smaller theaters such as Theater Latte Da and Mixed Blood Theatre (I tried to provide links for everything, so if something interests you, you can click for more info or to order tickets). This evening was fine example of what a great theater town this is. 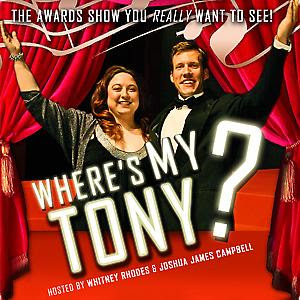 The show began with a medley of songs from each of the shows in the upcoming Broadway touring season (which I have season tickets for): Wicked, Rock of Ages, Billy Elliot, Shrek, Hair, Jersey Boys, and West Side Story. Josh and Whitney took turns singing the songs, complete with costume changes and pirouettes (from Josh during the Billy Elliot song).

Without further ado, the awards:

The Worst Title of a Musical: Urinetown. Before they even announced the nominees I knew this one would be the winner. I saw Urinetown seven years ago and loved it. It’s equal parts satire, social commentary (“people don’t want to be told their way of life is unsustainable”), and great music. I’m just waiting for a local theater to mount a production of it. Accepting the award was Jared Oxborough, who first caught my attention in Footloose at the Chanhassen Dinner Theatre earlier this year. He sang the best song from Urinetown, “Run, Freedom, Run.” He would make a great Bobby Strong, and an even better Che, which just happens to be his next role in Theater Latte Da’s upcoming production of Evita.

Most Controversial Musical: Avenue Q. Even though I was rooting for another nominee, the brilliant Spring Awakening, this is a good choice. Rose Le Tran (frequent performer with Mu Performing Arts) accepted the award and sang “I Wish I Could Go Back to College.” She will be appearing in Mixed Blood Theatre’s production of Avenue Q next spring, which I was really excited to hear about. I love this show but have only seen the Broadway/touring production, so I’m curious to see what a smaller production will look like.

Best Musical that Doesn’t Contain Any Original Music, aka Jukebox Musical: Jersey Boys. Catherine Battocletti (also in last year’s The Full Monty) accepted the award and sang “Oh What A Night” from the show, a fun song with audience participation!

Best Guilty Pleasure Musical: Starlight Express. I’ve never seen this show and don’t know much about it, but Josh and Whitney sang a song that was appropriately cheesy.

Most Epic Musical: Phantom of the Opera (which I’m proud to say I’ve never seen). Whitney and Josh again took this one, with Whitney playing the part of Christine and Josh growling the Phantom role. It ended with a fun disco version of the title song, complete with glow-sticks thrown out to the crowd.

After a brief intermission, Whitney and Josh announced awards that were given out previously, including:

Best Musical to Take Your Kids to, to Torture Them: Fiddler on the Roof
Musical that Makes you Think All Art and Creativity in Theater is Dead: 101 Dalmatians
Lifetime Achievement Award (for Continuing to Tour with that Tired Show): Phantom of the Opera

Back to the main awards:

Best Musical to Take Your Boyfriend to Who You Secretly Think is Gay: Mama Mia. The very talented Kinaundrae Lee (aka Angel in RENT at the Lab Theater earlier this year) took the stage to sing a dramatic rendition of the title song. He will be appearing in the Ordway’s production of Joseph and the Amazing Technicolor Dreamcoat (another nominee for worst title) this winter.

Best Show to Inspire Your Halloween Costume: Rock of Ages. Earlier in the show Josh had asked the crowd for names, verbs, body parts, etc. He inserted them into the song “Hit Me with Your Best Shot” which Whitney then sang. A sort of musical Mad Libs.

Best Male Diva (aka Divo) Song: “This is the Moment” from Jekyll and Hyde. Josh and Whitney tag-teamed this song, literally. One of them would sing a line or part of a line, then tag the other one who had to pick up where the song left off. It became very fast and funny, but they did a great job keeping up with it and sounded great too! I always admire the ability to maintain an amazing singing voice while playing for laughs (see Sara Ramirez in Spamalot).

The Best Show to Drink Through: Annie. Madde Gibba was called to accept the award but wasn’t responding. She was soon spotted behind the bar, and slowly (and drunkenly) made her way to the stage to sing a very funny version of “Maybe.” At one point she made her way into the audience and sat on a man’s lap to read a letter to her father. Madde is appearing in a few shows at the Fringe Festival this week.

The last award of the evening was Whitney’s choice, Best Song Typically Sung by a Woman that I Really Want Josh to Sing: “Maybe this Time” from Cabaret. This is the one of the all-time great musical theater songs, and Josh sang it beautifully. I'll next see Josh as the gentleman caller in The Jungle Theater's production of The Glass Menagerie next month.

The show concluded with the People’s Choice Award. There were ballot boxes on the bar where the audience could vote for “most anticipated show of the upcoming Broadway season.” I voted for Wicked, but only because I didn’t hear the question before I voted and I didn’t see all of the shows. The winner is the one I would have voted for had I been fully informed: Hair! My love for this show deserves an entire post to itself so I won’t go into it now; I’ll save it for a slow theater week (and yes I do have them!). But suffice it to say, I can think of no better way to end this show than a performance of “The Flesh Failures/Let the Sun Shine In” from Hair, with all of the above performers taking part. It was the perfect end to a perfect evening of musical theater.