"Wicked" at the Orpheum Theatre

Wicked! It’s one of my all time favorites, even though this is only the third time I’ve seen it. I’ve loved the soundtrack since I saw the show for the first time on tour in 2006, and haven’t been able to stop listening to it (and singing along) since! For those of you who don’t know, Wicked is based on the book of the same name by Gregory Maguire, which is a retelling of the story of the witches in The Wizard of Oz. But that’s really only a starting point; it’s an entirely new creation. Stephen Schwartz (music and lyrics) and Winnie Holzman (book) took this dark and complicated story and made it lighter and simpler, without losing the weight of the story. Both are truly remarkable transformations, as Maguire’s book has little resemblance to L. Frank Baum’s world of Oz, and the musical took the book and went in an entirely new direction. It’s really one of the most perfect musicals, it has everything! 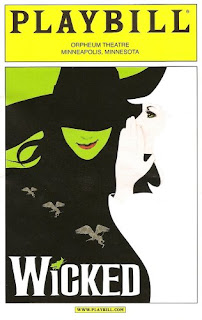 Seeing Wicked live is an entirely different experience than listening to the soundtrack. It’s a true spectacle (in a good way). The set is amazing, complete with a dragon hanging over the audience, a huge mechanical wizard head, flying monkeys, and lots of moving pieces and gears. The costumes are outrageously gorgeous. From the green and white striped school uniforms of Shiz, to the black and white dance clothes, and my favorite, the amazing green dresses of the Emerald City! And the hair is just crazy. But the reason this entire spectacle works is that there’s great substance behind it. As I mentioned, the music is rich and beautiful and fun. But it’s really the story that holds it all together. Wicked is not just about the good witch and the bad witch; it’s about friendship, finding where you fit in, and standing up for what you believe in, no matter what anyone tells you. And that’s something I think everyone can relate to. I certainly can; Elphaba is close to my heart – I consider “I’m Not That Girl” my theme song. ;)

This touring cast is extremely talented. Both Vicki Noon as Elphaba and Rachel Potter as Glinda (the understudy), have the vocal chops required for these two roles. Vicki stopped the show on several occasions: “The Wizard and I” and especially “Defying Gravity.” TV and movie vet Don Amendolia made for a charming wizard. Behind them was a talented ensemble of dancers and singers. Lucky for me I get to see this cast again tomorrow night! They’re performing in a cabaret called "Witches Night Off" to raise money for the Minnesota AIDS Project.

I'll leave you with one of my favorite quotes from the show (did I mention the show also features some biting social commentary?):

“The truth has nothing to do with facts and reason. The truth is what people agree on. Where I’m from we believe all sorts of things that aren’t true. We call it history.”