"The Seven" by Ten Thousand Things at Open Book 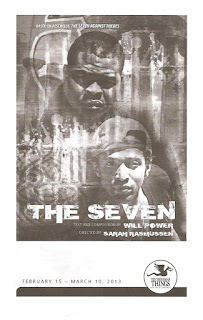 Friends, I know I rave about Ten Thousand Things often on this blog, but I'm telling you, The Seven is crazy good. It's unlike anything I've ever experienced. Using an adaptation by Will Power, they've taken an ancient Greek tragedy and reinvented it as something entirely modern, fresh, relatable, energetic, contemporary, and understandable. The New York Times review of the 2006 premiere at NY Theater Workshop referred to it as "a hip-hop musical comedy-tragedy." This cast of eight includes some of the top talent in this town, and they all bring it. There's really no choice but to do so; in the small fully lit space at Open Book with minimal sets and costumes, there's nothing to hide behind. What you see is what you get, and in this case, what you get is awesome.

Artistic Director Michelle Hensley introduces the show, as she always does, and sets the stage for those of us unfamiliar with the story. The original play, Seven Against Thebes, tells the story of Oedipus' sons, upon whom he levied a curse - that they would kill each other. Despite their best intentions to avoid the curse, they of course fulfill it, as always happens in Greek tragedies. The Seven also shows us Oedipus, explaining his own curse (that he would kill his father and marry his mother) and bestowing it upon his sons after they cast him out, and later appearing to them to encourage them in falling victim to it. It's a universal tale of family, war, power, fear, and destiny.

The cast is comprised of eight talented actor/singer/rappers (most of whom I've seen in theaters around town), directed by Sarah Rasmussen, fresh off the completely delightful In the Next Room at the Jungle. We are guided through the story by the narrator/DJ, mixing tunes and tales, played by the fabulous Aimee K. Bryant. Bruce A. Young is strong and powerful as Kind Oedipus, with a scary turn as one of the Seven who wage war against Thebes. As his sons, H. Adam Harris and Kinaundrae Lee give their all, vocally, physically, and emotionally, as the loving brothers who unthinkably turn against each other. One tough and kingly, the other a nature-loving poet, but both sons of the cursed family. The excellent Greek chorus consists of Katie Bradley, Brian Sostek, Ricardo Vazquez, and Joetta Wright, who also play the worried people of Thebes and the titular Seven, a parade of superheroes. Particularly impressive is Ricardo (see also Next to Normal), who possesses a voice that was made for musical theater, ringing out across the room with no amplification necessary. He also has a pretty cool fight scene with himself.

Even though hip-hop and rap are not my favorite musical genres, the music here is fantastic (directed, as always, by Peter Vitale, who also accompanies on percussion). Fast raps are combined with more pop sounding tunes, much of it a capella, all ably performed by the talented cast. The costumes (by Annie Cady) are simple but effective, modern mixed with classic (and to-die-for green gloves worn by the chorus to represent nature).

I don't know how Ten Thousand Things does it. In a fully lit room with minimal sets and costumes, you're more aware that this is just pretend, but somehow, because of their particular brand of genius, it's so easy to be carried away into their world, and never want to leave. I was so engrossed in the world created in that room, that when it was over and I walked outside, I forgot for a moment where I was and what I was supposed to do next. Reality is jarring when you realize that what you truly believed was reality for a short space in time was only make-believe. That's theater at its best, and that's what Ten Thousand Things consistently does. Three more weekends of paid public performances remain (in addition to their usual schedule of performing in prisons, schools, and community centers). Go see it.