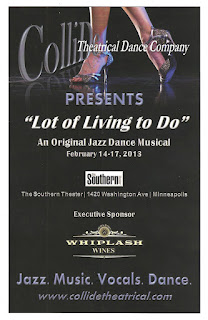 I don't go to many dance performances, mostly because it's hard enough to stay on top of the incredible theater scene in the Twin Cities area. To be fully immersed in the theater and dance world would be too much for one person to handle. But occasionally I find myself at a dance show (typically one with theatrical connections), and I always love it. Dancing is a further extension of the core principle of musical theater - that when ideas and emotions cannot be expressed in mere words, music and movement are necessary to fully convey them. In ColliDe Theatrical Dance Company's original jazz dance musical Lot of Living to Do, a story is told through dance alone, without a single word of explanation (a story summary in the program helps set the stage). The talented troupe of dancers is accompanied by jazz standards performed by a fantastic three-piece band and two talented singers, all of which combines for a very entertaining evening.

ColliDe's mission is to partner artists with Minnesota charities to create new works, an admirable goal (I've always believed that theater has the power to change the world, a little at a time). In this case, the charitable partner is the Women's Foundation of Minnesota's campaign to end underage prostitution in Minnesota, called "MN Girls Are Not For Sale." It's unthinkable that this occurs right here in our fair state, something I wasn't really aware of before reading the literature for this show. In fact, the Twin Cities is one of the 13 largest centers for child prostitution in the country. But don't worry, Lot of Living to Do doesn't preach or hit you over the head with scary facts. It's a story about working girls in the 1930s and their problems and triumphs over them, as a subtle reminder that things aren't that different today. The story centers on teen-aged Jenny, abandoned at a brothel by her mother who can no longer support her. Jenny eventually finds a way to escape this life, with the support of the other women who are in too deep to see a way out for themselves.

Some highlights of the show:
ColliDe Theatrical Dance Company beautifully tells this story in a fun and entertaining way. On the surface it's just a beautiful dance performance, until you see that it goes a little deeper than that. It's a great way to draw people in and inform them of a very real and serious problem, as well as offering a solution to that problem. In the real world, young girls need more than a cute bartender boyfriend to get them out of this terrible situation, which is where MN Girls Are Not For Sale comes in. See their website for more information on how to help in this worthwhile campaign, and go check out the show at the Southern (one performance Saturday night and two on Sunday) for an entertaining evening of jazz, music, vocals, and dance. Talented dancers, singers, and musicians, a captivating story, a great cause, and free drinks from sponsors Whiplash Wines and Stella Artois. What more can you ask for? 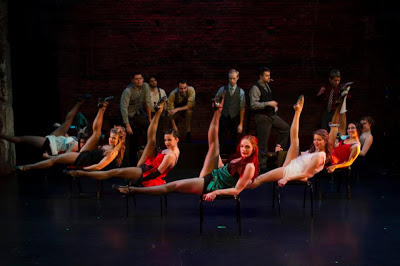