"Venus in Fur" at the Jungle Theater 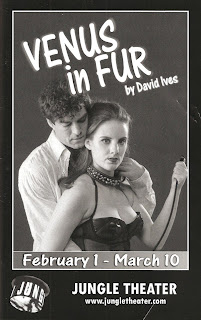 Venus in Fur was all the rage when I was in NYC last spring. I didn't end up seeing it, but it went on to be nominated for a couple of Tonys, including a win for best actress. When the Jungle Theater announced their 2013 season last fall, I was excited to see that Venus in Fur would be their first production, and even more so when I saw that it would star two of the Twin Cities best actors, Anna Sundberg and Peter Christian Hansen (who previously co-starred in Gremlin Theatre's After Miss Julie, performed in the basement kitchen of the James J. Hill House*). As usual, the Jungle does not disappoint. Venus in Fur is smart, sexy, funny, and highly entertaining.

Playwright David Ives adapted the 19th century German novel Venus im Pelz in an unconventional way (the book was written by Leopold von Sacher-Masoch, after whom the latter half of the term Sado-Masochism was coined). Rather than a direct adaptation, the play is about a playwright/director who has adapted the novel and is auditioning to find an actress to play the main character, Vanda. Hence we are treated to interactions between the characters in the novel, as well as interactions between the director and auditioning actress, which start to blend together as the play goes on. The play opens with the director, Thomas, frustrated that he can't find his Vanda after a long day of auditions. In walks a woman named, coincidentally, Vanda. She's flustered and flighty, having been caught in the rain, and seems ill-prepared for the audition. But Thomas reluctantly agrees to let her audition, and the moment she starts speaking, she becomes the Vanda from the book, and it's clear that she knows more than she's let on. She convinces Thomas to read the role of Severin, a man who falls so deeply in love with Vanda that he begs to become her slave. As they interact in character and as themselves, the balance of power shifts subtly between Vanda/Vanda and Severin/Thomas, so that it's difficult to keep track of who has the upper hand. The line between fiction and reality gets blurred, and it soon becomes clear that Vanda has an agenda that goes way beyond just getting a role in a play.

The play is one long scene, with neither actor leaving the stage or even taking a breath for 90 minutes. Both Anna and Peter give fantastic performances, as expected, and are just as comfortable in the period roles as the modern. Anna always throws herself completely into every role I've seen her play, holding nothing back, and this is no exception. As Vanda the actress she's funny and a little goofy, as Vanda the character she's smooth and elegant, and she even gets to play the seductive Venus herself. Peter is, as always, wonderfully intense. He too, gets to play multiple roles - the somewhat reserved director who is gradually drawn out by Vanda as he lives the roles he has written, Vanda's "slave" Severin (whom she calls Thomas, the footman!), and even taking a turn as Vanda. Under the expert direction of Joel Sass (who, as usual, also designed the set - a sparse and lifelike rehearsal room), Anna and Peter create a beautiful crazy dance.

When the lights went down at the end of the play, I had a moment of "wait, what just happened?" But I like that. It's never quite clear what Vanda's motivations are in planning this scenario, but I guess the playwright meant it to be ambivalent, I mean ambiguous. People and relationships are not what they seem, and are constantly changing. Go see Venus in Fur, playing now through March 10, for a wildly entertaining and engaging night at one of the best theaters in town, featuring a couple of the best actors in town.