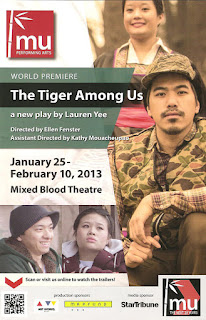 Sometimes when you go to the theater, a play is just a play. At other times, a play is so much more than just a play, it's a meaningful exploration of ideas or experiences, in which artists speak their truth. Mu Performing Arts' world premiere production of the new play The Tiger Among Us is such a case. Playwright Lauren Yee brings to life one of Minnesota's largest minority cultures, Hmong, through the story of one family. We're introduced to the family through the oldest son, Pao, who sits at the front of the stage and talks directly to the audience. He tells us that Hmong people "have big families and eat a lot." Sounds like just about every culture I've ever heard of!

Family patriarch Thao (Saikong Yang) immigrated to the US from Laos with his wife, eventually ending up in the small central Minnesota town of Perham. Mother May (Sheng Kong, seen in flashbacks and hallucinations) has been gone for years, and Thao is raising his two children by himself on a janitor's salary. Pao (Maxwell Chonk Thao) dropped out of high school to help support the family with a job at the local Panera bread (artistic licence, I'm pretty sure Perham doesn't have a Panera). Lia (Gaosong Vang Heu) is a senior in high school and the star of the volleyball team, being courted by college scouts. She's a typical American teenager, with no more worries than the next big game, until a school project requires her to ask her father about his immigration experience. Thao is out of town on a hunting trip, so Lia does some investigating on her own. As secrets come out, the world she knows slowly begins to fall apart. Meanwhile, Pao is making plans to move to St. Paul where they'll be surrounded by other Hmong people instead of isolated in this small rural community, where they daily face subtle racism (perhaps the worst kind). Thao wants to leave his past behind him and just live his quiet simple life, but he's forced to face his demons. It's a bit of a tragic ending, but yet with hope that the new generation can continue their parents' dream of making a new life for the family.

The strong cast includes four Hmong-American actors (who also shared their experiences in the post-show discussion), as well as Claire Bancroft as Lia's cheerful friend and Garry Gieken as several characters, ranging from the friendly neighbor to much more threatening forces. Maxwell is a very appealing actor (see also Into the Woods), and Gaosong is a fresh-faced and exuberant young actor; together they create a believable supportive and bickering sibling relationship. Also good are Saikong as the father struggling to raise his family, and Sheng as a haunting vision in her family's life.

Playing now through February 10, The Tiger Among Us is an interesting, entertaining, and thought-provoking look at the immigrant experience in a typical American family.