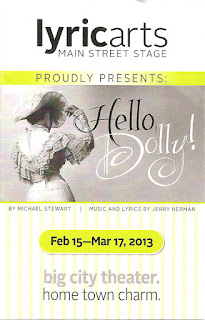 Despite being a huge musical theater fan, there are quite a few classic musicals I've never seen, on stage or on screen. Hello Dolly is one of them, so I jumped at the chance to see it at Lyric Arts in Anoka, just a short drive from my home in the Northeast suburbs. It is a bit dated ("it takes a woman all powdered and pink to joyously clean out the drain in the sink" is so not charming), but Dolly Levi is a heroine for all ages - independent, confident, and industrious, a woman who knows how to get things done. Lyric Arts' production features some fine performances of the catchy score and fun dance numbers.

Widow Dolly Levi is a matchmaker (among other things) in turn of the century New York, who delights in "putting a hand in here and there" to make love grow. One of her clients is the "half-a-millionaire" Horace Vandergelder, and she sets her sights on him for herself. It's not a great love (and personally I think she could do a lot better), but she misses her husband and is tired of living hand-to-mouth. She intentionally sabotages Horace's other matches to make herself look good, while also setting up Horace's poor young employees Cornelius and Barnaby with hat shop owner Irene and her assistant Minnie. The couples spend the day together, watching a parade, and end up at the fanciest restaurant in town. Hijinks ensue, everyone ends up arrested, and Dolly saves the day and gets what she wants, of course.

As I left the theater and walked down the streets of Anoka on a beautiful sunny late winter day, I whistled tunes from the show and happily checked Hello, Dolly! off my list of classic musicals to see.