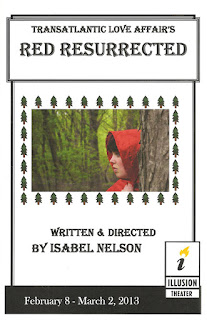 My favorite show of the 2012 Minnesota Fringe Festival was Transatlantic Love Affair's Ash Land. I was incredibly moved by their simple and eloquent storytelling; the company of actors created a rich and complex world using nothing but their bodies and voices. I was completely transported into another world, which is all I ask for from theater. Transatlantic Love Affair's 2011 Fringe hit Red Resurrected is currently being presented as part of Illusion Theater's "Lights Up!" series. Like Ash Land, it's another innovative piece of theater, and it deserves a much larger audience than the one at the Illusion Theater last night. At just 70 minutes, it's well worth your time to see something fresh and unexpected and completely lovely.

Red Resurrected, written and directed by 2012 Ivey emerging artist Isabel Nelson, loosely re-imagines the familiar fairy tale of Little Red Riding Hood, combining it with other myths and legends in a way that makes it feel like a completely new story, yet familiar. Red lives in a small town called Primrose in the hills of Appalachia; she has no family of her own, and instead is literally being raised by the village. She's a happy child, doing chores and playing with her friends, but warned never to go down to the woods. Red is fascinated by the woods, and as she grows up she begins to find that the woods are the only place she feels at home. When her safe and familiar world is shaken (the wolves that young women face are not always of the canine variety, but are just as dangerous), she escapes into the woods on a path that runs west out of Primrose. There she meets a woman who can heal the broken, and learns from her. Eventually she decides to return home to see if she can bring healing to her friends and family in the village.

In Transatlantic Love Affair's signature style, this seven person cast tells their story on a completely bare stage with not a single set piece or prop. This is a true company; all of them have appeared in previous TLA shows, and that connectedness shows. At times they move as one unit, representing everything in Red's world from the trees to the dripping faucet to every sound you've ever heard in the woods. They also beautifully sing traditional Appalachian music, which adds so much in creating this world. I hesitate to call out any members of this true ensemble because they're all just wonderful, but I will. Heather Bunch brings levity to her role as Red's friend and the grim Mrs. Quinn, but also brings out the serious side of both of these characters. Anna Reichert is also great as the narrator and wise woman of the woods, and Adelin Phelps once again embodies a completely relatable heroine to root for.

I love the way that Transatlantic Love Affair tells such simple and beautiful stories, combining movement, music, and words in a completely innovative way. It's really indescribable, so you should go see it for yourself (playing at the Illusion Theater in downtown Minneapolis now through March 2). If I may paraphrase the moving final words of the show, sometimes a woman finds herself on a path in the woods, fixing things that are broken, singing with a full voice to the mountains. I'll camp a little while in the wilderness, and then I'm goin' home.