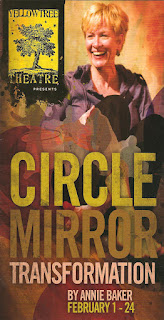 Circle Mirror Transformation is an odd little play, full of awkward pauses, interrupted conversations, and silly games. But it's also surprisingly deep and poignant. It'll make you laugh, think, and feel, which is my favorite kind of play. I saw it at the Guthrie a few years ago and it was one of my favorites of the year, and I knew it was a perfect choice for Yellow Tree Theatre. Circle Mirror Transformation and Yellow Tree are a great match - both are slightly quirky and offbeat, but with a lot of heart and great storytelling.

The entire 90-minute play takes place in a six-week community acting class in a small town in Vermont. We mark the passage of time with a changing sign on the bulletin board announcing the week. The play is constructed as a series of short scenes depicting class exercises, as well as interactions between the characters during breaks or before class. As the play progresses we piece together more and more of each person's story. Teacher Marty (Doree Du Toit, read an interesting story about her acting journey here) wants to share her love of the art with her students, one of which is her husband James, an original hippie (Kurt Schweickhardt). Theresa (Yellow Tree co-founder Jessica Lind Peterson) was a struggling actor in NYC until breaking up with her boyfriend and moving to Vermont a few months ago. Lauren (Tara Borman) is a typically sullen teenager who signed up for the class to help her win the role of Maria in her school's upcoming production of West Side Story, and wants to know if they're going to do any "real acting." The final student, Schultz (Dan Hopman), is going through a bit of a mid-life crisis, recently divorced and dealing with living on his own and trying to make a new start.

Each of these characters comes to the class for a different reason and gets something different out of it, but as the title suggest, each is transformed, in big or small ways. We witness the entire course of a relationship between Theresa and Schultz (beautifully, painfully, and realistically played by Jessica and Dan), from nervous attraction, to giddy infatuation, to a really awkward breakup, to some sort of closure. Marty is not quite as together as she seems and has some issues of her own to work through, with or without the help of her husband. Lauren is trying to escape some family issues, which she's finally able to admit in a really fascinating class exercise - each class member tells another person's life story, which reveals as much about the speaker as it does about the subject. This play is really a character study, and playwright Annie Baker has quite brilliantly allowed us to gain vital tidbits of information about each of them in an unconventional way, without telling the full story. One gets the sense that this is just a short snippet in each character's life, a full and complex life that started long before the action of the play began and continues long after it ends. As director Andy Frye (who does a beautiful job bringing out the depth of each of these characters as well as making great use of the space) says in the program notes, "the exercises performed serve only as a catalyst for what's really going on with these complex characters." As the play progresses, the exercises take on more and more meaning as we learn about the people performing them.

Costume, set, and props designer Sarah Bahr has perfectly created the world in which this story plays out. The slight wardrobe changes effectively signal a new day while allowing for quick changes between scenes. The Yellow Tree stage is about as bare as I've ever seen it - the back wall is painted a dull yellow, adorned simply with a barre, mirror, and bulletin board. The only set pieces are a hula hoop, stool, and and ball. It looks like any well-used community center classroom where any number of activities have taken place over the years.

I almost wish I could participate in a class like this, that's less about acting than it is about connecting more deeply with oneself and one's fellow human beings. On second thought, maybe that's exactly what (good) acting is, as perfectly illustrated in this production. This five-person cast, with no weak link among them, fully rises to the requirements of the material - being fully present and in the moment, speaking the way real people speak, with all the awkwardness of real life. If you've never made the trip up to Osseo, now is a great time to do it. Circle Mirror Transformation is one of the best shows I've seen at Yellow Tree Theatre. If you love funny, quirky, real, and poignant theater, you won't be disappointed. Playing now through February 24.