"Other Desert Cities" at the Guthrie Theater 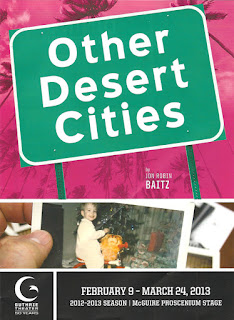 Other Desert Cities is the first of two 2012 Tony nominees for Best Play in the Guthrie's 2012-2013 season (the second is the Tony winner Clybourne Park, coming this summer). It's a family drama written by Jon Robin Baitz, creator of the TV family drama Brothers & Sisters. Similar to the Walker family featured in Brothers & Sisters, the Wyeths are a well-to-do political California family with secrets. The Walkers are liberal, but their eldest daughter grew up to be a Republican and moved to the East Coast. The Wyeths are California conservatives (hobnobbing with the Reagans) whose eldest daughter grew up to be a Democrat and moved to the East Coast. She returns to her parents' Palm Springs home with the manuscript of a book she has written and wants to publish, which will air all of the family's dirty laundry that her parents have worked so hard to overcome.

Unlike the Walker brood of six, the Wyeths have three children. The eldest died decades ago, after becoming involved in the bombing of a recruitment center in the 70s. Middle child Brooke was permanently effected by the tragic death of her big brother and has struggled with depression as she tried to make sense of it. The only way she could do so was to write her memoir, the story of her brother from her perspective as a young girl watching it unfold, but not really being able to grasp the whole story. Trip, the youngest, is a producer of reality TV, working really hard to be happy and keep the peace in the family. Polly is the epitome of tough love, especially where her daughter is concerned, and Lyman would do anything for his children. Rounding out the family is Aunt Silda, Polly's recovering alcoholic sister who is living with them until she gets back on her feet. She's not afraid to tell it like it is, and these five people with very different and strong opinions about the situation make for a Christmas to remember, and an entertaining play.

Another similarity to Brothers & Sisters is that the Guthrie's production of Other Desert Cities features a fantastic ensemble cast, made up of some Twin Cities favorites as well as a few newcomers (directed by my favorite director, Peter Rothstein of Theater Latte Da). As the family patriarch and actor-turned-politician, David Anthony Brinkley is the stern but loving father, a calming presence until he explodes when overcome with love and frustration. The fabulous Sally Wingert (who I like to refer to as the Meryl Streep of the Twin Cities theater scene, but I may have to change that to the Sally Field of the Twin Cities theater scene, now that she's played two Sally Field roles - the matriarch in a Jon Robin Baitz family drama and Mary Todd Lincoln) is the tough love mother, and Michelle Barber is a hoot as her sister Polly. Sally Wingert and Michelle Barber should play sisters whenever possible; that's something I'd like to see repeatedly, these two divine and powerful actresses sparring with each other on stage. The Wyeth children are played by two welcome newcomers to the Guthrie stage, Kelly McAndrew and Christian Conn, who really dig into their roles. Kelly as the messed up Brooke, and  Christian as the loveable Trip, trying to cheer everyone up and smooth things over, but soon revealing some torment of his own. This a family that is entertaining to watch as they try to make it through this crisis intact.

I found myself getting frustrated with Brooke, still blaming her parents for things that happened decades ago, when she doesn't really know the whole story. There comes a point when you have to forgive your parents for what they did or didn't do, and just accept that they did their best and take responsibility for your own life choices. When you're young you think your parents hung the moon, then comes the stage where all you see is their mistakes, and finally, you come to accept them as human beings. This is what Brooke finally seems to learn by the end of the play, which jumps forward several years in a sort of postlude.

I find it interesting that Other Desert Cities is playing across the lobby from Long Day's Journey Into Night (at least through this weekend). Although one takes place 100 years ago and one is modern, both plays are about a dysfunctional family dealing with mental illness and drug addiction, who love and support each other despite everything (although perhaps not in the most healthy of ways). Other Desert Cities has some lighter moments and doesn't feel as hopeless as Long Day's Journey, but it's interesting to me that family dynamics haven't changed all that much in 100 years. The Wyeth family will be residing in the sunny and airy Palm Springs home on the Proscenium stage now through March 24.