"Buzzer" by Pillsbury House Theatre at the Guthrie Studio Theater 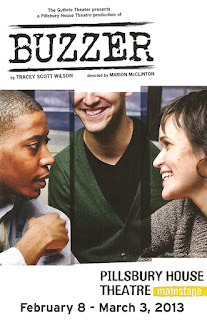 The new play Buzzer by Tracey Scott Wilson premiered at Pillsbury House Theatre last year. It explores issues of race, class, gender, and gentrification in this seemingly post-racial world. It's one of those plays that'll leave you with a slightly uneasy feeling because of the very real and intense issues it brings up. Like all theater by Pillsbury House, it's more than just a play, it's an exploration of ideas, conflicts, and issues that are extremely relevant to the world we live in, but that we may be reluctant to face. That's what great theater does, make us face those issues head on. If you missed it last year, you have a second chance to see it at the Guthrie studio (playing now through March 3), where the entire cast and creative team has reassembled. The play may have been tweaked a bit since its last run, but I didn't notice any drastic changes from when I saw it last year; it's as if the entire production was plucked out of Pillsbury House and placed intact in the Guthrie Studio. It was one of my favorite plays last year, and the kind of play that almost requires repeat viewing, so I was more than happy to see it again.

Tracey Scott Wilson has crafted an intense one-act drama, with the action and the tension constantly building. Scenes overlap; a character will be having a conversation, then turn and begin a new scene and conversation with another character without taking a breath. It never lets up, until the final painful confrontation. Here's the plot summary I wrote last year:

Jackson is a successful lawyer who grew up poor in a neighborhood filled with drugs and violence, and was able to get himself out and make a better life for himself. He rents (to own) a newly remodeled apartment in his old neighborhood, which is transitioning from a "bad neighborhood" to one with coffee shops and lofts and restaurants. He and his girlfriend Suzy, a teacher in the inner-city schools, move in. Jackson convinces Suzy to let his down-on-his-luck best friend Don move in with them, despite her reluctance. Don is from a privileged background, and despite constantly getting himself into trouble, has been able to get out of it thanks to his rich and powerful father. Jackson was given nothing and worked hard to achieve the life he wanted, while Don squandered every opportunity he had. But somehow the two men remained friends. Their friendship is tested when Suzy tells Don that she's being harassed on the street, and they grow closer. Each member of the trio has their own plan to end the harassment. Suzy thinks that if she stays strong and ignores the bullies, they'll eventually stop. Jackson wants to threaten them with violence, while Don thinks reasoning with them and being friendly will solve the problem. The conflict grows inside the apartment and outside on the street.

Hugh Kennedy won an Ivey Award for his performance as Don, and seeing it again it's even more clear why.  He completely embodies this damaged character struggling with his demons and trying to live a better and sober life. It's a very physical performance; Don's addiction is apparent in his jittery hands and frenetic energy as he moves uneasily around the apartment. Namir Smallwood and Sara Richardson are also great as the troubled couple Jackson and Suzy. Each of these three actors creates a complex character, all of whom make bad choices at times but are very real and relatable. Marion McClinton returns as director and brings all of this complexity together in a cohesive way (check out this feature on MN Original about his amazing career journey). Lastly, the simple and elegant set by Dean Holzman (which looks very similar to what I remember from last year's production) provides a great space for the story to take place.

The title refers to the broken buzzer in the apartment building, and who the residents are willing to let in based on their own prejudices and assumptions, which may not agree with what they claim to believe. In the program notes, the playwright says, "The young characters in Buzzer think they are beyond race. They were raised on ethnic food, multi-cultural TV and hip-hop. They don't discuss race because they don't see race. They know slavery was an abomination and all men are created equal. What's to discuss? They discover that there is a lot to discuss and keeping silent is much more destructive than speaking the truth." This play breaks through the silence and speaks the truth, at least from the point of view of each of these three complex characters. It doesn't offer any solutions, but addressing the issues and bringing them to light is a great beginning.