The 2012 Ivey Awards at the State Theatre 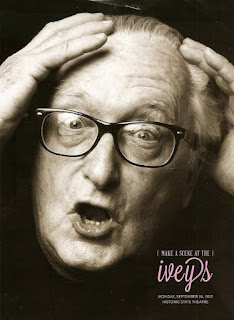 The Ivey Awards is always my favorite theater night of the year, and this year's awards ceremony was my favorite of the six I've attended. Why? I saw seven of the ten awarded productions, the host was perhaps the best I've seen, I completely agree with the choices for this year's Emerging Artist and Lifetime Achievement awards, the featured performances included some of my favorite shows of the year, and I had a fabulous time at the after party with my blogger buddy The Playbill Collector talking to many of my favorite theater artists. That all adds up to perhaps the best local theater night I have ever experienced! Once again, I'm blown away by the level and diversity of talent in the Twin Cities theater community, and I'm truly honored to be a part of it in my own small way.

The hilarious Shanan Custer was a perfect choice to host this year's awards (as we have learned from TV awards shows, it's always better to ask a comedian). I didn't know who she was when she did a skit at last year's Iveys, but I have since seen her in several things, including one of my favorite shows at the Fringe this year. She was funny and charming and natural, a great guide to the evening's activities. Many of her funny words were written by Joseph Scrimshaw and Zach Curtis, but she ad libbed a bit too. After a particularly moving acceptance speech, she came on stage and said, "I'm crying already, I just want to make art!"

The show opened with a slideshow of the over 70 local theater companies, and then sadly, a rather lengthy "In Memoriam" segment (including the co-host of my favorite radio show, Tom Keith aka Jim Ed Poole). And then, the opening number. "In the beginning was the Word, and the Word was Places!" (Reminding me of one of my favorite sounds in the world - "The call is places!" announcement at the Guthrie.) Beth Gilleland and Dane Stauffer gave a history of sound and light in the theater, with actors Brian Sostek, Katie Bradley, Madde Gibba, Taj Ruler, and Neal Skoy interpreting their words to amusing effect. As they've have done in the past few years, the Ivey people managed to turn what could be the most boring segment (thanking the sponsors) into one of the most entertaining. Shanan introduced a scene from that great American play, Angry People in a Living Room, starring the comedy team of Scrimshaw and Middleton as very dramatic brothers who just happen to name sponsors in their argument about whom their father loves most.

Ten Ivey Awards were given out this year. Many of last year's winners returned to present awards to this year's winners (for the shows that I saw, click on show name to read my thoughts at the time).

This year's Emerging Artist is Isabel Nelson, co-Founder and co-Artistic Director of Transatlantic Love Affair. She directed the Ivey-winning production Ballad of the Pale Fisherman. As I said above, I was so moved by TLA's Ash Land at the Fringe this year that I plan to see everything this woman creates with this completely unique company, including a remount of their 2011 Fringe show Red Resurrected at the Illusion early next year.

The final Ivey awarded was the Lifetime Achievement Award, which went to Rick Shiomi, the founder and (soon-to-be-retiring) Artistic Director of Mu Performing Arts, one of the most influential Asian-American theater companies in the country. The interview/film package they showed was fascinating, as it told how Rick created this theater company and built the talent pool around it. I have enjoyed many productions by Mu over the last several years, including the incredible taiko drumming ensemble Mu Daiko, and I can't think of a more deserving recipient of this award this year.

Interspersed with the award presentations were six varied performances from shows this year. Musical numbers were accompanied by the fabulous Ivey band, led by Denise Prosek. The performances included: 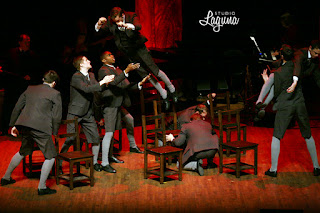 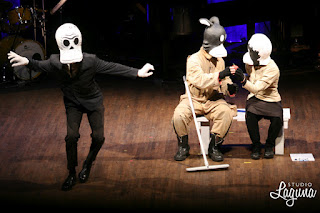 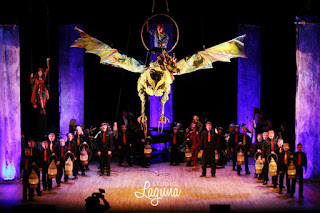 So ended an awesome celebration of Twin Cities theater. It truly was a wonderful evening that highlighted many theater artists and companies for the great work they did this year. If you're a local theater-goer and you've never attended the awards, you should go next year. It'll inspire you to go to even more local theater!

Celebrity Sighting
Too many to recount here!! On the red carpet, inside the theater, at the after party, it felt like every other person I saw was someone I've seen in a show. My blogger buddy The Playbill Collector and I made the rounds at the after party and talked to many of our favorites. Everyone was so gracious and sweet, and many said lovely things about my blog, which I very much appreciate. It was truly a pleasure to meet and chat with each and every one of you, and I look forward to seeing you again soon!