"Waiting for Godot" at the Jungle Theater 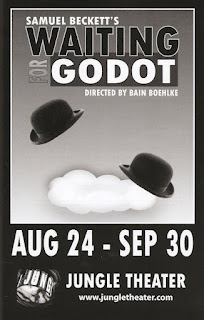 Samuel Beckett's classic Waiting for Godot is an amusing, perplexing, delightful, profound, absurd little play (literally, "absurdist" is the genre to which the play belongs). I've heard of it of course, but only in vague terms, so I wasn't sure what I was getting into when I saw it at the Jungle Theater earlier this week. But I knew that in the hands of Director Bain Boehlke and two of my favorite local actors, Nathan Keepers and Jim Lichtsheidl, I was in for a treat. And I was not wrong.

It seems appropriate to structure this blog post as a serious of random bullet points rather than a cohesive summary, so that's what I'm going to do.

What else is there to say? A classic piece of theater, with impeccable acting, set design, and directing. If you're a fan of the theater (and really, if you're not, what are you doing here?), go see it.  Playing at the Jungle Theater now through the end of September.