For the third year in a row, I spent Labor Day weekend immersed in the world of folk music at Storyhill Fest, aka folk music heaven on earth. Located on a large beautiful wooded property on a lake in the Brainerd area, the festival drew a record 400 people in its 4th year of existence (I missed the first one, but I have a good excuse - I was out of the country!). Featuring two full days of music by a dozen folk musicians from all over the country, plus the magical nightly campfires, it really is (as emcee J-Matt likes to remind us) the best kept musical secret in Minnesota. Plenty of outdoor activities on land and water, a family-friendly atmosphere, workshops for aspiring musicians, comfortable accommodations ranging from campsites to cabins to private rooms in a lodge, small enough to give you that up-close-and-personal feel with the artists, large enough to draw acclaimed talent from the folk music world, what more could you ask for in a music festival?

In chronological order of their appearance on stage, here are a few words about the artists that made up this year's festival (click on each artist's name to be taken to their website, where you can find information about purchasing their music or seeing them perform live):

Beth Wood: Beth was the perfect artist to open the festival, and she chose the perfect song to begin the weekend of music. She told us it's her mission statement, but it could be used as the theme song for Storyhill Fest: "I'm gonna open my mouth, and sing my joy." A really strong voice, an engaging personality, and a gift for sharing stories make Beth one of my favorites of the festival. And I was pleasantly surprised to recognize the voice of one of my old faves on her newest CD The Weather Inside - Drew Womack from Sons of the Desert!

Sarah Sample: A fresh face and a fresh voice, one that's wispy and ethereal but with a power behind it. She has a great range of songs, from the fun ukulele number "Holiday," to a lovely song about her grandparents' love story that brought a tear to my eye, to a cover of Lyle Lovett's "If I had a Boat." But I think I most enjoyed listening to her simply sing around the campfire.


Danny Schmidt: As I said when I first saw him at Storyhill Fest two years ago, Danny's a true poet. He again sang the song I find so mesmerizing and epic, "Stained Glass," what he calls a humanist Easter story. Fortunately he gives a little intro before each song, because like all good poetry, his songs can be a little hard to understand, but once you have the key to unlock it, you find in them nothing less than truth. His better half Carrie Elkin accompanied him with her lovely voice on several of the songs.


Laurie McClain: A self-described "hippie chick," I can just picture Laurie singing and playing guitar on the college campuses and city streets of the hippie movement in the 60s and 70s. She was born too late for that, but she's helping to keep the tradition alive, "maybe the hippie/peace/love thing will come around again, and this time it'll stick!" She's charming and quirky (handing out prizes to audience members who admitted they've seen a UFO), entertaining with a large catalog of songs ranging from silly to poignant.


Carrie Elkin: What can I say about Carrie that I haven't already said (here and here)? She has performed and/or emcee-ed at every Storyhill Fest I've attended, and I can't imagine the festival without her. Her voice is a force of nature, and I'm beginning to think there's nothing she can't do. She shared a set with the next two artists so we didn't get to see as long of a solo show as in the past, but she made up for it by singing backup for many of the artists - because who doesn't sound better with Carrie Elkin standing next to with them?

Steve Parry: I've heard Steve sing around the campfire for the last year or two, but this time he made it up on stage (in a round with the previous and following artists). With a great country-sounding voice and songs that tell a specific story, he was one of the few (perhaps the only) Minnesotans on the Storyhill Fest stage this year, proving that we grow 'em good here too.

Shannon Wurst: Sharing a set with the previous two artists, I don't feel like I saw enough of Shannon. But I heard enough to know I'd like to hear more. There's something very appealing about her voice - pure and honest. Fortunately she sang a few more songs at the campfire both nights, and maybe she'll get a full set at next year's fest!

Rebecca Loebe: Rebecca played the role of "homeless musician" on NBC's singing competition The Voice last year. She was picked by both Christina Aguilera and Adam Levine, and chose to work with Adam. She was eliminated in the first round (which is probably a good thing because those shows have a tendency to suck the soul out of people, or at least give it a good try!). Hollywood's loss is Deerwood's gain! She's funny and spirited, with playful quality to her voice and interesting vocal styling that seems effortless but is a result of impeccable control. I first heard her at the campfire on the first night of the festival, where she sang a song about how "you can't knit socks for a married man," and was instantly smitten with her music.

Nels Andrews: I also first heard Nels sing at the campfire (quite a nice way to be introduced to an artist). He sang a haunting and lovely song called "Wisteria." More goodness continued during his set on day two. With really interesting and deep story songs and great melodies, he's equally good on stage and around the campfire. He worked as a chauffeur for an eccentric woman in NYC for a while, from which came several songs, including one about the "Duchess of Carnegie Hall." I've been listening to his newest recording Scrimshaw this week, and the more I listen to it, the more I like it.


Doug & Telisha Williams: It is my opinion that the coolest instrument one can play is the upright base. You very rarely see a woman play it, so I was thrilled and intrigued to see an upright bass in the hands of Telisha, one half of this married couple duo, whom I already loved from hearing them sing around the campfire the night before (without the bass). And she can really play. Like any good bass player, she plays the instrument with a grace that's almost like dancing. Accompanied by Doug on acoustic and electric guitar, swapping solos and harmonies, this duo has a fantastic unique sound. If I were forced to pick a new favorite from Storyhill Fest 2012, I might pick Doug & Telisha. Being from Virginia "in the shadows of the Blue Ridge Mountains," they've got that country/mountain sound that I love. And they're also quite the comedy team! A very entertaining set; watch the below video of their song "Graveyard Train" and judge for yourself.


Sam Baker: I don't think I've ever seen anyone like Sam Baker. I'm not sure there is anyone like Sam Baker. Watching his performance is a trippy experience - he's in his own world, but somehow manages to carry the audience along with him even if we're not quite sure where we're going. Many of his songs are partly spoken, as he lays his lyrics on the audience and watches them intently, waiting for the words to sink in. He can even turn "The Itsy Bitsy Spider" into some sort of existential tale. If you ever get the opportunity to see him perform live, take it. I guarantee it'll be a one-of-a-kind unforgettable experience.

Storyhill: I'm a relatively new Storyhill fan, considering they've been playing and recording together off and on for over 20 years. I came on board during their Red House Records days, with whom they've released two CDs in the last five years. Something about their music, whether it's the songs that they write or their incredibly beautiful harmonies, really gets to me. I could listen to them play the same songs every night and never get tired of it! Their long history together is evident in the ease they have on stage with each other, trading solos and harmonies back and forth effortlessly. They're the last act of both nights, and they're able to gather some really talented and diverse musicians around them, all of whom seem to enjoy making music together and being at this festival. I get the feeling they'd do this even if there were no audience there to watch them. The bad news about Storyhill is that they're taking 2013 off from touring. But the good news is that they're making an exception to play and host Storyhill Fest on Labor Day weekend, and they'll be releasing a new record in 2014. I'm willing to make that trade!

Check out this of Storyhill singing their song "White Roses," which morphs into the Beatles' "I'm Looking through You." (More Storyhill Fest videos available at the Cherry and Spoon youtube channel, including two versions of my favorite Danny Schmidt song "Company of Friends.")

If all of the above wonderfulness isn't enough to convince you that Storyhill Fest is the place to be on Labor Day weekend, there's one more bit of wonder. The highlight of the festival is the nightly campfire sing. The artists come down to the biggest campfire I've ever seen and pass songs around, while we festival-goers get to watch and listen. It's a truly magical experience. Everyone sounds better by a campfire. Not that they don't sound amazing on stage and on their recordings, but when some of your favorite musicians are singing and playing guitar just a few feet away from you in the still night air of the Minnesota woods, there's nothing quite like it. There's something about the acoustics of a campfire that brings out the truth in a song. The hardest thing in the world is leaving that campfire while the music is still going on, but there comes a point when I just can no longer stay upright, and must stumble through the dark to bed, to go to sleep with the music softly ringing in my ears, dreaming of next year.

Tickets for Storyhill Fest 2013 will likely go on sale later this year so keep checking the website, or sign up for the newsletter to be the first to know. 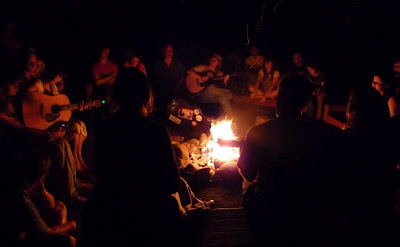