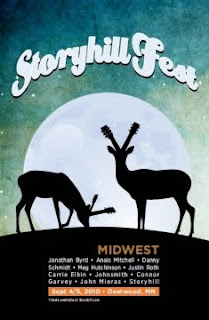 While this blog will mostly focus on theater in the Minneapolis/St. Paul area, I did warn you in my Origins post that I might occasionally write about music. This is one of those times. I spent labor day weekend at StoryhillFest - a folk music festival in the Brainerd lakes area of Minnesota (one of my favorite spots on the planet, by the way). The festival is named after one of my favorite groups, Storyhill - two guys, their guitars, great songs, and beautiful harmonies. They gathered around them some of the most talented singer/songwriters/musicians I've ever seen in one place. This is only the second year of the festival in Minnesota (they've been doing it longer in their native Montana), and as the very capable and witty emcee said, it has to be one of the best kept secrets in Minnesota. If people knew what great music was being made here, they'd be turning people away. I hope it's successful enough to continue for many years, but I also hope it never gets so big that it loses it's intimate community feel. In addition to Storyhill's performance each evening, nine other artists performed at the festival, only one of whom I had heard before, and all of whom I enjoyed. I managed to limit my initial CD buying to four, although I think there will be a few more to come in the next few days. Here's a short summary of each artist, click on their name to be directed to their website. Connor Garvey was the brave first artist to take the stage on the first day, when the camp chairs were only half full. He had two musicians with him - Tom Murphy on mandolin and Jeff Mitchell (who also sang lots of great songs at the campfire) on electric guitar. Connor's website says his "songs are like placing folk-funk guitar and ukulele, soulful vocals, and paradoxical metaphors in a juicer - you've never tasted it before, but it's intriguing and delectable so you have to keep drinking." What more can I say? Except that his songs are hopeful, funny, and thoughtful, and I found him completely adorable. I didn't buy his CD the first day, trying to pace myself, but in the end I couldn't resist his youthful charm and red hair. By the way, Tom is an amazing mandolin player and at the campfire he could play along with anyone on any song, even if he'd never heard it before! 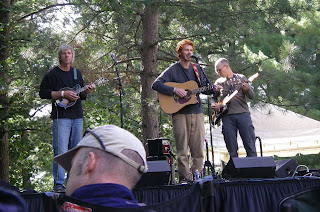 Next up was Carrie Elkin. I knew before her first song was over that I would need to buy her CD. She has a voice so clear and pure that, combined with her insightful songs, it cuts right to your soul. I love that her voice is so powerful she actually had to back away from the mic at times, otherwise the sound system might have combusted with the sheer power and passion of her voice. Following her was her partner in life and, sometimes, music, Danny Schmidt. They both sang back-up for each other in addition to several solo songs. Danny is an amazing songwriter; my favorite was about a broken stained glass window, which he called "a humanist story in a church song." It's an amazing piece of songwriting; I want to study it like a poem. 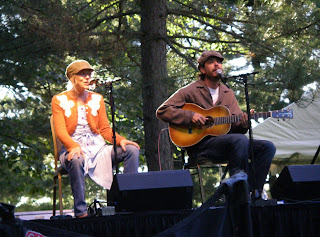 The last act before Storyhill was Anais Mitchell, accompanied on some songs by Rachel Ries on percussion and keyboard and Jefferson Hamer on electric guitar. Anais has an amazingly indescribable voice, so I won't even try. See (hear) for yourself: I just downloaded her newest CD Hadestown, "a folk opera based on the Orpheus myth and set in a post-apocalyptic American depression era," which I find very intriguing. Rachel is also a talented singer/songwriter; she and Anais recorded a lovely little EP called Country. 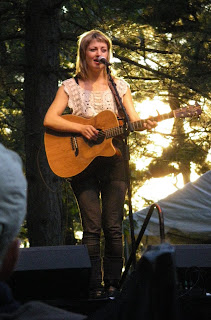 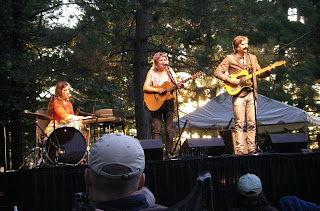 Storyhill concluded the concert part of the day, and after that everyone moved over to the campfire. I'll talk about both later, but the interesting thing to note is that my first impressions of the next day's artists were singing around the campfire, which is kind of a nice way to first hear someone. Day 2 was the day of Johns. The first one to take the stage was John Mieras. The interesting thing about John is that he doesn't really look the part of a folk singer, he just looks like an average guy. Which he is; he recently quit his 9-to5 job to do what he really loves - music. So when he took up the guitar at the campfire I thought, who's this guy? And then he started to sing, and he just blew me away. He has a really pretty voice, especially in the upper range. I bought his 7-song CD partly because I like his voice and songs, and partly because I want to support him in continuing to pursue music. 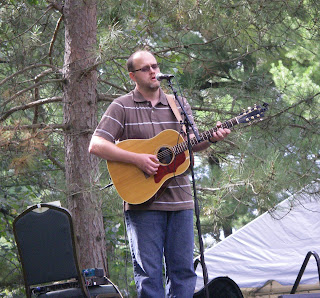 Justin Roth was the only other artist besides Storyhill that I knew before the festival. He performed during a service at my church a few years ago, and I so loved his song "Shine" that I bought the CD. Turns out I like his new stuff even better, so I pre-ordered his upcoming CD (my four CD total is growing daily). He's an amazing guitar player and had led a guitar workshop earlier in the day. As you can see in the below picture, he played an entire song on the neck of the guitar. I didn't know you could do that! He's also a very talented and clever songwriter and a great singer. 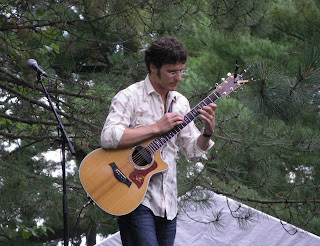 The next artist was another John - Johnsmith. Again, I'm not sure I can say it better than his website: "Johnsmith is a Bard. The role of the Bard in every society is to hold up a mirror to that society, to convey and reveal - through the mysterious alchemy of music and words and performance - the secret inner language of the heart." I think that applies to all the artists at the festival, but especially to John. He sang a really lovely song at the campfire called "Safe Home," which he wrote while in Ireland and very much reminded me of my trip there. 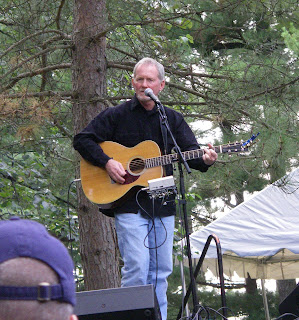 Taking a break from the Johns, the next artist was Meg Hutchinson. Another lovely voice and beautiful, thoughtful songs. One I especially liked is called "The Gatekeeper" and is about someone who works at the Golden Gate Bridge and has the task of stopping suicide attempts, which he does by asking two questions: "How are you feeling?" and "What are your plans for tomorrow?" She joked that her job is to write cheerful songs about depressing topics. I'm not sure I'd say cheerful, but uplifting and inspiring, yes. Hers is one of the four CDs I bought at the festival. 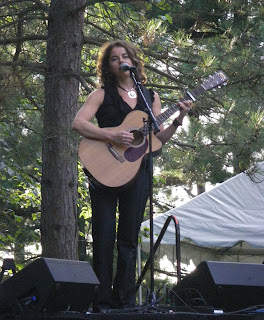 How can I describe Johnathan Byrd? He's a character, just look at his photo below! Not everyone can pull off orange pants, cowboy boots, and a cowboy hat, but he can. His music veers a little bit more towards country, and his songs can either be funny or heart-breaking, or anywhere in between. The last song I heard from him was as he was leaving the campfire on the final night to drive to Chicago. I don't remember exactly what it was (I was up way past my bedtime so it's all a little foggy), something about a pony I think, but I do remember it was achingly lovely. 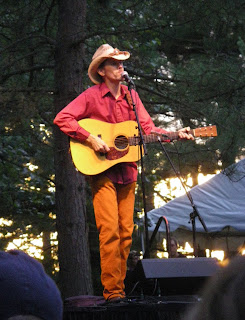 And now we get to the main attraction and reason for the festival - Storyhill, aka Chris Cunningham and John Hermanson. They met as kids in Montana and have been making music together ever since (with a few interruptions). They went to college at St. Olaf and Johnny still lives here in Minnesota, so I think it's fair that we claim them as our own, or at least share ownership with Montana. ;) I first heard of Storyhill when their self-titled CD was released on Red House Records a few years ago. They played it frequently on the dear departed MPR Morning Show with Dale Connelly and Jim Ed Poole (aka A Prairie Home Companion sound man Tom Keith). It was the gorgeous harmonies on the song "Give Up the Ghost" that convinced me to buy their CD, and once I listened to that I was hooked. I've seen them a few times in concert since, and I knew if they were organizing this festival it was going to be great. I was not wrong! I don't know what else to say about these guys, very talented individually and together. And obviously with a great ear for talent, judging by the people they invited to their festival. Here's a video I recorded of one of my favorite songs, especially when performed live, "Steady On." I think they're contractually obligated to end every concert with this song. ;) Chris and Johnny on stage: 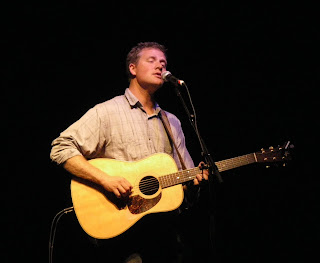 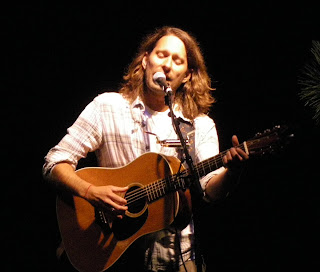 After the day's concerts were over, all of the musicians headed over to the campfire (which was conveniently located next to the lodge where I was staying). This was definitely the highlight of the weekend. It's one thing to listen to a CD, with everything cleaned up and auto-tuned (although there's less of that with folk music), another thing thing to hear someone sing live, but to hear the unamplified human voice is something really special. Whatever concert I go to, if the artist puts down their mic, it's always my favorite moment of the show. There's just something so raw and beautiful and primal about it, especially in the light of the campfire. I can imagine that hundreds of years ago, on that very spot, Native Americans were sharing songs and stories with each other in that same way. Maybe I'm still sleep deprived from two nights in a row of staying up past 1 am, but it was a truly magical experience. I think the artists did it as much for themselves as the attendees, and I felt like I was pressing my nose to the glass and watching these musicians in their element. The only thing close to it that I've experienced was when I was in Ireland, and you go to a pub in a small town and the entire town shows up, all taking turns sharing their music and a little part of their soul. That's what this was like.

I think what I love most about StoryhillFest is that it gave me a new source to find great new musicians that I love, something I've been missing since the Morning Show was cancelled. I have a great deal of admiration for and more than a little envy of people who make a living doing what they love, whose work is their life's passion. These people are modern-day troubadours, traveling the country and sharing songs and stories. I can't wait until next year to discover more new favorites!

A few more videos of Storyhill: