The 2010 Ivey Awards at the State Theatre 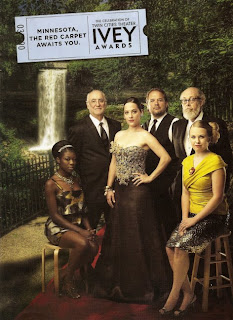 This is my fourth year in a row attending the Ivey Awards, Minnesota's theater awards.  It's always one of my favorite theater evenings of the year, because it's not just about recognizing a handful of great accomplishments this year, it's about celebrating this amazing theater community that I'm so grateful to be a witness to.  There were almost 1000 eligible productions at over 70 participating theaters this year.  We saw performances from five of those shows, and a dozen awards were handed out.  One way that the Iveys are different from the Tonys is that if you see a great show on the Tonys, it's likely still playing and you can go see it.  But with the Iveys, these shows are done and over.  I only saw one of the awarded productions, so I missed out on some great theater this year!  I'm going to try to get out to more of the 70+ theaters (I've only attended 15 of them), and see if I can become an Ivey evaluator.  So maybe next year I'll be more familiar with the winners.

Part of the fun of Ivey night is people watching.  It was quite entertaining to walk down Hennepin Avenue in Minneapolis and see people dressed to the nines next to people in their Twins gear headed to Target Field (go Twins!).  We saw some gorgeous dresses and beautiful suits, as well as some questionable ensembles, but all carried off with style.  I like to see which of my favorite actors I can spot walking down the street, at the pre-show party, and in the rows around me at the State Theater.  It's a good night for star-gazing!

The show opened with the opening number ("I Hope I Get It") from A Chorus Line.  The dancers were various people from the theater community and when they lined up with their head shots, they told their real stories.  One woman sang "What I Did For Love" because she left NYC for Minnesota so she could work and have a family.  Several of the "older" members sang "Hello wisdom, hello choices, hello life!"  A couple of teachers sang "Kids and Class."  The voice in the back of the theater was a woman who was half of an influential couple in the theater community, John and Sage Cowles.  John was one of the people who convinced Tyrone Guthrie to build his theater in Minneapolis, which mayor RT Rybak called "The Big Bang" of Minneapolis/St. Paul Theater.  It was a really clever number and a good way to introduce us personally to several local artists.

This year's hosts were Jungle Theater Artistic Director Bain Boehlke and recipient of this year's Lifetime Achievement Award Wendy Lehr.  She's currently appearing in The Glass Menagerie at the Jungle, which I saw last week.  In case you don't remember what I said about Wendy's performance, here it is: "Friends, if you have the chance to see Wendy in anything, take it. I've seen her in several things in the last few years (including as Big Edie in Grey Gardens, and stealing every scene she was in in The Full Monty), and she's always amazing. She inhabits whatever character she's playing fully, and has this great spark and stage presence that's much bigger than her petite frame."  Nice to know that the Ivey voters agree with me!  The fun part is that she had no idea and seemed truly surprised and touched.  She's had an amazing career in theater of fifty years and counting.

The ceremony was a mixture of performances and awards, presented by theater people, past winners, and corporate sponsors (thanks Best Buy!).  First, the awards.  The people, theaters, and productions honored at the 2010 Ivey Awards are:

The performances were amazing and really the highlight of the show. Jennifer Baldwin Peden (half of the uber-talented Baldwin sisters who later presented an award), sang "Listen" from Nautilus Music-Theater's production of Joan of Arc. The cast of Always and Forever at Illusion Theater sang "Signed, Sealed, Delivered." Live Action Set acted out the entire Lord of the Rings trilogy in about five minutes and with no props other than an oversized ring. It was hilarious and spot-on. The cast of the wonderful production of my favorite musical RENT at the Lab Theater reunited for an energetic performance of "La Vie Boheme." The future of Twin Cities theater was on display in a performance of "Tomorrow" by a group of young people in the community. The night ended with a performance from Theater Latte Da's production of The Full Monty. And yes, they went "the full monty." :)  A fun way to end a fun night.

As always after attending the Ivey Awards, I'm inspired to go see even more local theater!


Check out the red carpet fashions here (sadly, our pre-show photo did not make the cut).