The 2011 Ivey Awards at the State Theater 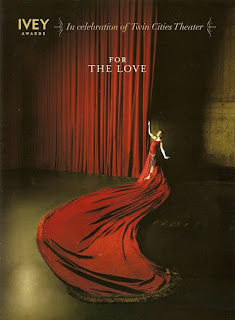 For the love.  That was the theme of this year's Ivey Awards, and nothing could sum up this evening better than that simple statement.  I look forward to the awards every year because it's such a beautiful celebration of the theater community in Minneapolis/St. Paul.  Plus, it's also the best people-watching of the year (not counting the State Fair, which is beautiful in its own way).  This year was another fantastic night showcasing several of my favorite shows of this past year, and possibly of the upcoming year as well.

The hosts of the show were a father and son team of local actors.  Seth Numrich is currently starring on Broadway in the hit play War Horse, and his father, Charles Numrich, is an actor in the local theater scene.  They were charming hosts.  The running gag was that they were working on the "opening banter" scene, trying to "find themselves in the piece," and Seth kept giving his father notes about how to better play himself.  In addition to the hosts a number of local celebrities and representatives from the awards' sponsors presented the awards, including the Twin Cities' most beautiful news anchors, Frank Vascellero and Amelia Santaniello, as well as puppet supercouple Princeton and Kate Monster.

The opening number was a mash-up of four of my favorite musicals of this year, as well as one that just opened that I'm dying to see: the Children's Theatre's delightful Annie, the wickedly funny and sweet Avenue Q at Mixed Blood, the hilariously goofy A Funny Thing Happened on the Way to the Forum at the Jungle, the Guthrie's luscious production of HMS Pinafore, and Hairspray currently playing at the Chan.  It was a salute to costumes and the people who make them happen.  Characters from each show wandered onto the stage, which was populated with backstage theater people.  They each sang a song from their show, only with alternate lyrics appropriate to the Iveys.  It was really surreal and fun to see all these characters from diverse shows interacting.  As usual Miss Hannigan (Angela Timberman) stole the show, and the sailor from the Pinafore (Aleks Knezevich) ended up with no pants.

The Ivey Awards aren't like most awards shows you see on TV; there are no set categories or nominees, they just honor wonderful accomplishments wherever and however they appear.  This year they awarded eight people or productions, in addition to the emerging artist and lifetime achievement awards.  The honorees are:
Of these eight productions, I saw five (numbers 2, 4, 5, 6, and 8), which is a pretty good percentage.  (Although technically I did not see Ben Bakken's award-winning performance; he had the night off when I saw Jesus Christ Superstar (slacker).  But that's not my fault so I'm still giving myself credit for it!)  Considering I only saw one of the awarded productions last year, I'd say that's quite an improvement.  It was my goal this year to see more "obscure" productions (meaning not at one of the big theaters in town), and see more theater companies that I'd never seen before.  I definitely met my goal, although I still missed a lot.

In addition to these awards, the Iveys also gave the "Emerging Artist" award to Anna Sundberg, whom I recently saw in Street Scene and look forward to seeing again soon.  This year's "Lifetime Achievement" award went to Bain Boehlke, Artistic Director of the Jungle Theater.  He was presented the award by last year's winner Wendy Lehr, his friend and frequent collaborator.  I've really been enjoying my season pass at the Jungle this year, and couldn't be happier for Bain!

A usual, the musical performances were the highlight of the show.  We saw excerpts from one upcoming show, three past shows, and one show that's currently running.  The upcoming show is one I'm very much looking forward to - Park Square Theatre's Ragtime, which opens in January (tickets are already on sale and I've got mine!).  Coalhouse Walker and Sarah sang the beautiful and hopeful song "Wheels of a Dream."  One past show that I unfortunately missed is Ivey honoree Buddy - The Buddy Holly Story at the History Theatre - great songs and a fun performance.  Mu Performing Arts reprised "Suddenly Seymour" from their wonderful production of Little Shop of Horrors this spring.  Sadly, Audrey II did not make an appearance.  Another Ivey honoree, Live Action Set, presented an excerpt from their opera of sound and movement, The 7-Shot Symphony.  The final performance of the night was a great choice for the closing number - Cardinal Theatrical's production of The Rocky Horror Show, currently playing at the Lab Theater (I'm seeing it this week).  The number began with an introduction from the show's narrator, former WCCO-TV news anchor Don Shelby like you've never seen him before - in heels (he quipped that's what was under the desk).  The cast sang "Whatever Happened to Saturday Night," led by Jamecia Bennett as Eddie.  Judging by this performance, it's going to be a fun, energetic, crazy show!

There was one other performance at the awards last night, featuring young local talent.  Ryan McCartan is a recent high school graduate who has won several national awards in musical theater.  He sang "Someone to Fall Back On," and he's truly amazing.  He has a gorgeous voice and also put a lot of emotion into the song.  I hope to see him on local stages before he becomes a big star.

They finally found a way to make announcing the list of sponsors entertaining.  Local comedic actor Shanan Custer announced each sponsor, and two actors acted out each one.  It was fast and funny, and made a segment that usually drags feel like a legitimate a part of the show.

And with that, another year of theater has come and gone.  I've seen some really amazing shows, and discovered some great new (to me) theater companies.  And it only seems to be getting better.  If you're reading this blog I probably don't have to tell you this, but I will: go see some local theater!  If you need suggestions, check out my "Upcoming Shows" to the right.  If you have suggestions for me, please let me know.  There's more brilliant theater out there than one person can possibly see (believe me, I've tried).