"H.M.S. Pinafore" at the Guthrie Theater 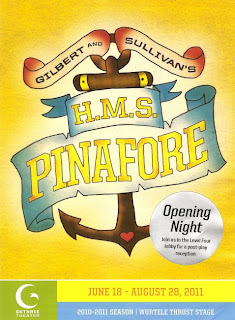 My favorite production that I've seen at the Guthrie in the past eight seasons of being a subscriber is the Gilbert and Sullivan musical (or opera) Pirates of Penzance, in the spring of 2004.  It was the final show of my first season as a subscriber, and I loved it so much I immediately bought a ticket to see it again.  It exemplified everything that's good about the Guthrie - a huge cast comprised of local and national talent, beautiful choregraphy and direction, gorgeous sets and costumes, all-around high quality entertainment.  So when I saw another Gilbert and Sullivan show on the schedule for this season, my expectations were high.  I attended the opening night* of the show, and I was not disappointed.  I'm not sure it eclipses my memory of Pirates, but it came close and was reminiscent of that show that I loved so much.

I saw a production of H.M.S. Pinafore about five years ago at Theatre in the Round, so I was somewhat familiar with it, although since that was before my days of blogging I don't remember a whole lot about it.  I know that the music has been changed and "modernized" for this production, but I'm no expert on Gilbert and Sullivan so I can't really speak to that, other than I enjoyed what I heard.  The fantastic orchestra is onstage (Andrew Cooke is the musical director and arranger), which is fun to see because the orchestra is usually not visible in the thrust theater.  The set is the deck of a beautiful ship.  And the costumes, like in Pirates, made me drool.  The women wear gorgeous dresses that are all bright colors and flounces and bustles and ruffles.  And the hats!  Of course costumes mean little when the substance isn't there, but that's not a problem in this case.

The plot of Pinafore is similar to Pirates: star-crossed lovers who come from different classes, singing and dancing seamen (in this case sailors in the Queen's navy), a woman with a secret about our hero's birth, and an appearance by the venerable Barbara Bryne as Queen Victoria.  The earnest lovers Ralph (a lowly sailor) and Josephine (the captain's daughter) are played by Aleks Knezevich and Heather Lindell, both of whom have gorgeous voices that are a pleasure to listen to.  The woman with the secret is called "Little Buttercup," and comes on the boat to sell trinkets to the sailors.  The versatile Christina Baldwin, most recently seen in The Moving Company's original piece Come Hell and High Water, is quite amusing in this role.  Equally amusing is Robert O. Berdahl as the buffoonish captain who's never sick at sea and never swears.  Well, hardly ever.  His crew salutes him while snickering behind his back, for which he abuses them.  Josephine is betrothed to the ruler of the Queen's navy - Sir Joseph (Peter Thomson, also hilarious), who is accompanied by "his sisters and his cousins and his aunts" (the wearers of the aforementioned gorgeous dresses).  There are a dozen sailors on deck who perform many wonderful dances (choreographed by David Bolger).  The most impressive is a show-stopping tap dance in the second act.  I love a good tap dance, especially when performed by dancing sailors!

I had never been to an opening night at the Guthrie before (my season tickets are usually later in the show's run), so I wasn't quite sure what to expect.  At the end of the performance, director Joe Dowling (Artistic Director of the Guthrie) came onstage to talk a little about the show as well as the 5th anniversary of the new Guthrie building.  There was much applause for the show as well as for the Guthrie, and what it means to this community.  After the performance there was a champagne reception in the lobby, although I didn't see too many actors in attendance (it is a little hard to recognize them out of wardrobe).  All in all it was a wonderful evening at the theater, one of many I've had in this beautiful building.  H.M.S. Pinafore is playing all summer, and it's great summer blockbuster entertainment.

*I received two complimentary tickets from the Guthrie to attend the opening night of this show.  Since I have season tickets I would have seen it anyway, but this gave me the opportunity to see it earlier in its run and tell you all about it earlier.  I'm looking forward to seeing it again with my season ticket next month, and seeing how the show has grown (as well as possibly catching some of those one-liners I might have missed).

Update: it was even better the second time around!  Everyone seemed more comfortable in their roles, and therefore they were able to have even more fun with the material.  This is such a fun, high-energy show, I don't think I would ever tire of watching it.