"On the Town" by Skylark Opera at the E.M. Pearson Theatre 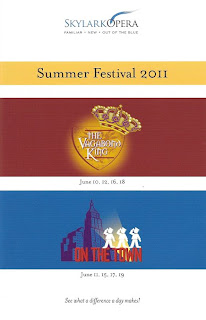 As much as I love new, edgy, innovative musical theater, I also love a good classic musical.  On the Town, about three sailors on leave in New York City for 24 hours in 1944, is a classic.  I'd never seen it before on stage (the playbill notes that this is probably the first time it's been professionally produced in the Twin Cities) or screen (for a musical theater fan, I haven't seen many classic old movie musicals).  With my love for musical theater and NYC, it's about time I saw this one!

Skylark Opera is presenting On the Town in repertoire with The Vagabond King in their summer festival at the E.M. Pearson Theatre.  The two shows have overlapping, but not identical, casts and musicians, and different directors and choreographers.  Leonard Bernstein wrote the music for On the Town based on an idea of Jerome Robbins, who also choreographed the original Broadway production (the two most famously collaborated on West Side Story, coming to the Orpheum this summer).  Comden and Green wrote the book and lyrics (and now I understand one more reference in the musical about musicals, [title of show]).

The plot follows three sailors in NYC for one short day: the organized and determined sightseer Chip (Paul R. Coate, who appeared in one of my favorite shows of 2009, Theater Latte Da's The Full Monty), the playboy Ozzie (Jon Andrew Hegge, a constant in the Guthrie's annual production of A Christmas Carol), and the naive farm boy Gabey (Dieter Bierbrauer, a favorite from the Chan, Latte Da, and several other theaters).  While riding the subway, Gabey falls in love with a girl on a poster and is determined to find her.  The boys split up in their search for "Miss Turnstiles," and each meet a girl of their own.  Chip runs into taxi driver Hildy and the two sing a charming duet in which he asks her to drive him to see various sights in NYC, and she slams on the brakes of the cab and tells him it's no longer there, so "Come Up To My Place."  Sarah Gibson as Hildy really looks the part of a tough, tall, 1940s broad, and can really belt out a tune (including the fabulous "I Can Cook Too").  Ozzie meets Claire (Jennifer Eckes), an anthropologist who's studying men in an effort to get them out of her system and settle down with her fiance.  I like that Hildy and Claire aren't your typical movie/musical girlfriends; they're both career women who go after what they want.  Maybe this is a reflection of the times, when women filled the employment vacancies left by men off fighting in WWII.

Back to the main love story.  Despairing of ever finding his "Miss Turnstiles," Gabey laments how lonely the city can be, and the audience is treated to Dieter's beautiful voice in the sad and lovely "Lonely Town."  But since this is a musical, he does find Ivy (Sarah Lawrence), at her singing lessons with the hilarious and boozy Madam Dilly (Kinsey Diment).  They make a date for that evening, but what Gabey doesn't know is that Ivy has a job "dancing" at Coney Island, and she stands him up because she can't afford to miss work.  Gabey is reunited with his friends and their dates, and they take him out on the town and try to cheer him up with the fun friendship song "You Got Me."  It doesn't work, and when he finds out where Ivy is, he takes the train to Coney Island to see her.  The other two couples follow, and on the long train ride they realize how short-lived their romances must be in the poignant "Some Other Time."  Gabey and Ivy reunite and the three couples enjoy the rest of their short time together, in and out of jail.  The sailors say their goodbyes to the girls and the city, as a fresh batch of sailors arrives on shore.  And the story begins anew.

This production features a large and capable ensemble, including Laurel Armstrong and Jake Endres (who opens the show with the low and lovely "I Fell Like I'm Not Out Of Bed Yet"), both of whom recently appeared in Flying Foot Forum's beautiful and moving original musical Heaven.  The ensemble scenes celebrate NYC nightlife and the activities and people of Coney Island.  (They remind me a bit of Annie, which also features ensemble scenes celebrating NYC life.)  There are also a few beautifully choreographed and performed "dream ballet" sequences, one during "Lonely Town" and one when Gabey's riding the subway to Coney Island to confront Ivy.  The traditional orchestra in the traditional pit was great; I love entering a theater and hearing the cacophonous sounds of the orchestra warming up and tuning.  I also loved the 40s era costumes and hats!

This is a perfectly delightful show.  Leonard Bernstein's gorgeous score, Comden and Green's witty lyrics, great performances by all of the leads and a strong ensemble backing them up, and fun choreography.  You can't ask for more from a classic piece of musical theater.