"Heaven" by the Flying Foot Forum at the Guthrie Theater 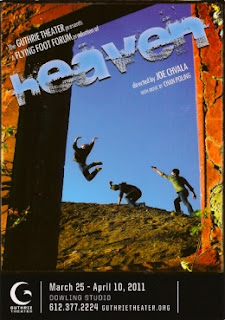 It was a last minute decision to see Heaven yesterday.  I had heard about this dance/music/theater piece about an American photographer in the Bosnian war and was intrigued.  So when I found myself with a free Sunday afternoon, I decided to do what I most love to do on a Sunday afternoon - see a matinee.  It turned out to be one of the best decisions I've made recently; I'm so grateful I had the opportunity to see this amazing, intense, beautiful show!

Heaven is a production by the dance company Flying Foot Forum, directed by Artistic Director Joe Chvala (pronounced koala, as the lovely woman sitting next to me who knew Joe as a child told me).  They specialize in a style of dance called "percussive dance," and while the dancing is definitely an integral part of the storytelling, I wasn't expecting Heaven to be as much of a classic musical theater piece as it is.  The music (written by Chan Poling) is of various styles, ranging from traditional music of Eastern Europe, to a classic musical theater love song.  I found the score to be inventive, original, moving, and memorable; if there were a soundtrack available, I would buy it!

But let me start at the beginning.  The Guthrie website warned audience members to be in their seats 15 minutes before the show started for the "pre-show entertainment."  The stage is set up as a cafe, and while the wonderful band (directed by Jake Endres and featuring the amazing vocals of Natalie Nowytski) plays traditional music, people start filtering into the cafe, greeting each other, talking, laughing, dancing.  It feels like a welcoming neighborhood sort of place; I wish this place were real and I were a part of it.  Then the dancing starts to get more aggressive, and like in the school dance scene in West Side Story, dancing turns into fighting turns into dancing again.  The proprietor of the establishment (played by Joe Chvala) breaks up the fight, and welcomes the audience to "Cafe Heaven," where "all are welcome."  But be careful, because the sentiment "all are welcome" also applies to "Cafe Hell" across the street.  And as the story unfolds, it becomes clear just how short a journey it is from one place to the other.

The protagonist of the story is Peter Adamson, an American photographer (played by the wonderful Doug Scholz-Carlson, who is so good I'm surprise I haven't seen him in anything before).  Peter is in Bosnia to serve as a witness to the atrocities of war, hoping he can somehow change the world.  After three years he's become jaded and convinced that no one can do anything to help.  A few days before shipping out, he meets a man named Faruk and agrees to go on one last mission to help him find his wife.  The experiences he has on the journey and the people he meets prove to be life-changing, in more ways than one.  He gets the one shot that lands him the front page of the New York Times, that might possibly bring awareness and an end to the senseless killing.  But he's conflicted about his success because he knows that there's much more behind the photograph.  In the end, he finds he can't leave this place and its people behind.

This is mostly an ensemble piece, and what a talented ensemble!  Most of the actors play multiple roles from soldiers to citizens and everything in between.  Joe Chvala and Sherwin Resurreccion serve as narrators and guides through much of the action, and display the percussive dance style to great effect.  The lovely-voiced Laurel Armstrong (whom I recently saw in Into the Woods at the Bloomington Civic Theatre, which Joe Chvala also directed) plays Lejla, a woman that Peter meets along the way (the afore-mentioned love song).  Eric Webster is the hardened and bitter soldier Faruk who wants nothing more than to live a life in peace, reunited with his wife.  All of the dancers are amazing, expressing the frustration and pain and hopefulness of the people through their dance.  It's quite impressive what that many dancers can do in such a small space as the Dowling Studio!

Another interesting feature of this piece is the use of images.  Often when Peter takes a photograph, that photograph is projected onto the backdrop of the set, giving the audience a chance to see the world through Peter's lens.

This is the kind of musical I wish were prevalent on Broadway today, instead of umpteen movie and TV show adaptations and jukebox musicals.  Original musical theater that uses music and movement to tell an interesting, relevant, meaningful, entertaining story, and to help us make sense of the world we live in.  That's what musical theater can, and should, do.  And when that happens, there's nothing better.