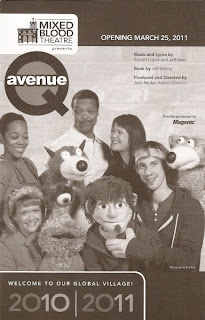 The Tony award-winning musical Avenue Q is Sesame Street for adults.  Particularly young adults in their early 20s who are transitioning to adulthood and realizing that Sesame Street didn't tell the whole story.  The happy sing-song-y score sounds like something you would hear on a kids' show, but with songs like "Everyone's a Little Bit Racist," "Schadenfreude," "It Sucks to Be Me," "If You Were Gay," and "The Internet is For Porn," you know you're not in kids territory anymore!  The show is delightfully irreverent and non-PC; pretty much every ethnicity and social group gets skewered.  But in the end it's a hopeful story about friendship and enjoying what you have in life when you have it, because "everything in life is only for now."  I've seen the show on Broadway and on tour, and Mixed Blood's production (directed by Artistic Director Jack Reuler) is just as wonderful and inventive.

Like Sesame Street, many of the characters in Avenue Q are puppets.  Mostly human puppets but a few monsters as well (aka people of fur).  But unlike Sesame Street, the actors portraying the puppets are completely visible.  The puppets were designed to look like their human counterparts and they wear identical clothing, so it's almost like you're seeing double.  This amazing cast does a fantastic job of matching their human emotions and movements to their puppet's emotions and movements.  The human emoting complements the puppet's movements so the puppet actually looks sad or confused or upset.

The show is perfectly cast, not a weak link among them.  In the Broadway/touring version several of the actors do double duty as more than one character.  There's less of that here; instead, several of the actors join the band (led by Jason Hansen) when they're not onstage.  In fact, there's only one member of the band who doesn't also play a character onstage.  The most ingenious example of this is Eric Mayson, who plays Trekkie Monster and also plays bass in the band.  He's dressed in black with a full-sized monster puppet strapped to his back.  He walks around backwards onstage, and then goes back to the band with Trekkie still on his back while he plays the guitar.  There is one instance of an actor playing dual roles; like in the Broadway version, the same actor plays our monster heroine, Kate Monster, and her nemesis, the sleazy lounge singer Lucy T. Slut (her name says it all).  Bonnie Allen does this brilliantly, at times having conversations with herself, smoothly going back and forth between the boozy, throaty voice of Lucy and the girlish voice of Kate (Ruth Christianson inhabits the puppet Kate when Lucy's on stage).  The center point of this triangle is Princeton, the naive and idealistic newcomer to Avenue Q who learns that adulthood isn't as easy as he thought.  I've seen Tom Reed before in a different incarnation - as Lounge-asaurus Rex, host of Sample Night Live (a monthly showcase of the local arts/music/theater scene), which I saw once last fall and am still hoping to get back to sometime soon.  Tom is very funny and clever as Loung-asaurus Rex, ad libbing songs and entertaining the audience between the acts.  But I could hear a great voice behind the comedy, which he shows off in this show.  Other puppet residents of Avenue Q include roommates Rod and Nicky (think Bert and Ernie).  Seth Tucker will break your heart as Rod, the closeted gay Republican investment banker who wants nothing more than to be loved.  He dreams one night of having his love for Nicky (Brian Skellenger, one of my Chanhassen faves) returned, and it's a beautifully cheesy and romantic scene with the puppets flying and twirling through the air (Lauren Chapman choreographed the puppet and human movements).  The non-puppet residents of Avenue Q include engaged couple Brian ("unemployed and turning 33") and Christmas Eve (a stereotypical Japanese immigrant who has two masters degrees but can't get a job), played by Shawn Hamilton (who also plays the sax, onstage and off) and Rose Le Tran.  The superintendent of Avenue Q is none other than Gary Coleman (Brittany Bradford) - "I had a lot of money that was stolen by my folks."  Rounding out the cast of characters are the adorably sinister "bad idea bears" who represent that little voice inside of us that says things like "spend all your money on beer!" or "have a long island iced tea, they're yummy!"  You know it's a bad idea, but they're so darn cute they're impossible to resist!

I didn't realize the Mixed Blood Theatre was a black box theater until I walked in and the stage was on the opposite end of the room.  The brick townhomes of the Broadway/touring production have been replaced by simple black and grey boxes with sliding sections that reveal the various apartments in the building.  It's an efficient and clever use of space, with scene changes accompanied by drum solos by Andy Mark.

This is a fabulous show.  If you're familiar with this blog, you know I love everything.  But really, this production is fun, hilarious, accessible, light-hearted, and heart-warming, with great performances of catchy, singable songs.  The house was packed last night and the audience was clearly having a good time.  It's playing through the end of the month, so get your tickets now!

Update: the show has been extended through May 29.