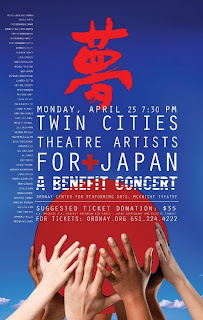 The Ordway took their fun and colorful production of Joseph and the Amazing Technicolor Dreamcoat on tour to Tokyo, Japan earlier this year, and a few days after their arrival, the earthquake hit.  The experience obviously affected the cast and crew greatly, which inspired them to pull together much of the top musical theater talent in the Minneapolis/St. Paul area (including many of my favorites) to perform in a benefit concert at the Ordway's McKnight Theatre last night.  It was a wonderful evening of music and entertainment that raised money for the Red Cross.  (And it almost made up for the Guthrie not doing their annual Cabaret show this year.)

The evening began with Joseph castmember Brian Kim singing "Something's Coming" from West Side Story.  Next, local actor Linda Kelsey gave us a few sobering facts about the earthquake and its continuing repercussions, and introduced the evening's hosts, Kimberly Wells and Kristine Kvanli from ShopNBC.  The singers were accompanied by four talented pianists: Mindy Eschedor, Denise Prosek (Music Director of Theater Latte Da), Gregory Theisen, and George Maurer (more about him later).

Back to the performances.  Dennis Curley from local theater company Table Salt Productions sang a very funny song about a dinner party that got a little out of control, "I Should Have Said No."  Jennifer Eckes sang about her love of bald men in "I Want Them."  The next performance featured a delightful dance number by Brian Sostek and Megan McClellan of Sossy Mechanics, preceeded by a cute little voice from the audience crying, "Mommy!  Daddy!"

Local director Austene Van introduced her performance by saying that she usually stays behind the scenes, but was recently encouraged to share her voice with an audience.  It became clear a few seconds into the performance that she was joking, as she sang in a very over-exaggerated style with a very dramatic dancer behind her.  Very funny.

The next singer, however, was no joke.  I recently saw Melissa Hart in Frank Theatre's fabulous production of Cabaret.  A Broadway veteran, she was also involved in the original Broadway production of Cabaret.  She sang "Make Someone Happy," and her years of experience shone through in the way she emoted through the performance and sang to the audience.  Lucky for us, she now calls the Twin Cities home.

Joel Liestman was part of the Joseph cast and one of the people behind getting this event together.  He performed a comic ode to his lawn.  Next, Michael Gruber and one of my favorite Chanhassan regulars Tony Vierling performed "Moses Supposes" from Singing in the Rain (which Tony starred in a few years ago at the Chan).  In addition to some tongue-twisting lyrics, the performance included some pretty impressive tap-dancing.

The penultimate performance of the first act was by another one of my favorites, Bradley Greenwald.  He was brilliant as the emcee in Frank Theatre's Cabaret, among many other performances.  He sang the opening number from The Music Man, you know, the one that sounds like a train and includes the line "but he doesn't know the territory!"  It's super fast and contains a ton of lyrics, and was masterfully performed (although I'm glad I wasn't sitting in the front row at that point ;).  I'm pretty sure there's nothing Bradley can't do.

The first act ended with the always thrilling Mu Daiko.  A Japanese drumming group that's part of Mu Performing Arts, their presence seemed appropriate to the theme of the evening and was an entertaining and rousing combination of percussion and choreography.

The second act began with a performance of "Any Dream Will Do" by the cast of Joseph.  Another one of my favorites, from Theater Latte Da, the Chanhassan, and other theaters, Randy Schmeling, sang the lead (I also happened to be sitting next to Randy's biggest fan - his mom).  Connie Kunkle joined him, as did much of the cast, including a few children.

Ann Michels, who's been in too many amazing shows to mention, sang a beautiful song called "Christmas Lullaby."  She was accompanied on the piano by George Maurer, with whom she frequently performs as part of the George Maurer Jazz Group.  George later performed an original solo piece called "Purple Muppets," which combined classic rock, TV theme songs, and classical piano pieces.  In a very funny intro to this song, he said he wrote it as therapy for his "pianist's envy."  I have a few of his CDs but have never seen him live; I'm thinking now I need to make sure that happens soon.

James Rocco proved that he's not just the man behind the scenes as the Artistic Director of the Ordway when he sang a fast, jazzy song called "Cloudburst."  Connie Kunkle came back to center stage to sing "I've Got No Strings."

I just adore Jim Lichtscheidl; he never fails to crack me up.  He's currently appearing as Captain Bluntschli in Arms and the Man at the Guthrie, but he's recently made a name for himself by playing multiple characters in one piece.  He's brilliant at differentiating the characters through the tone of his voice and the carriage of his body.  Now I know he can do it in dance too!  He performed a hilarious dance/comedy routine in which his partner dropped out at the last minute, leaving him a "Dear Jim" letter which he sheepishly read on stage.  He then proceeded to do both parts of the dance, holding a dress on a hanger in front of him when he was doing the female part.  Brilliantly entertaining, as usual.

I had just seen Regina Marie Williams the day before in Ten Thousand Things' delightful Man of La Mancha, in which she plays the prostitute Aldonza, aka the lady Dulcinea.  She's wonderful in that role, and last night sang a beautiful, jazzy rendition of "Come Rain or Come Shine."  Erin Schwab followed that with a wacky performance of "Somebody to Love" (because nothing puts you in the mood to give like a hootenanny Queen song).  She had the audience help her out with the chorus, which I was able to do because I knew the song from Glee (my window into the world of popular music).  In addition to being very funny, she has a killer voice too.

The next performance featured my favorite local actor, Dieter Bierbrauer, in a performance from his recent Off-Broadway show Power Balladz.  His co-star from the 2009 Lab Theater version of the 80s jukebox musical, Randy Schmeling, joined him for "Wanted, Dead or Alive" (one of the few 80s songs I know despite never being featured on Glee).  They gave a very hammy, sincere performance of the song with dramatic poses and facial expressions.  But they both have outstanding voices individually that blend together beautifully, so even though they were playing it for laughs, it sounded gorgeous and rich.

The final individual performance of the night was given by Tokyo native Momoko Tanno.  It was very moving to hear her talk about her home and family, and then sing a Japanese song which translated to "My Country Home."  It made the recent tragedy seem a little more real.

Finally, all of the performers joined Jen Burleigh-Bentz and Jake Endres singing "You'll Never Walk Alone."  It was just thrilling to hear all of those amazing voices blend together in this inspirational song.  Which brings me to the business portion of the evening.  The Japanese people need our help.  If you're like me and you've been meaning to make a contribution to the Red Cross, but just haven't gotten around to it, maybe this will serve as a good reminder, as it did for me.  If so, you can go to the Red Cross website and click on "Donate Now" in the upper right-hand corner.  You can then check "Japan Earthquake and Pacific Tsunami" if that's where you want your donation to go.

Thanks to all of the artists and behind-the-scenes people who donated their time to bring this wonderful evening to reality and raise money for a good cause.  I only wish more people had been there to see it!