"Joseph and the Amazing Technicolor Dreamcoat" at the Ordway 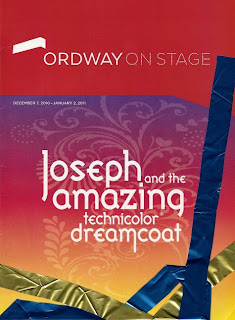 I walked into the Ordway Center in St. Paul last night and saw a sight I've never seen there before - children playing on stage.  Dressed in colorful clothing, they were skipping rope, tossing balls, doing cartwheels, dancing, and goofing around.  It turns out they weren't a school group run amuck, they were part of the production.  41 local school children, chosen out of over 300, were on stage most of the night - singing, dancing, or just sitting on the side of the stage, watching the action.  I had a hard time taking my eyes off of them (I saw a few little Rachels and Kurts in their midst), it was so fun to watch their reactions to the main action.  But the main action was well worth watching too.

Written by Tim Rice and Andrew Lloyd Webber in the late 1960s, Joseph and the Amazing Technicolor Dreamcoat is based on the biblical story of Joseph, youngest and favored son of Jacob.  He was sold into slavery by his jealous brothers, and because of his talent for reading dreams, he rose to power as the Pharaoh's 2nd in command.  He led the country through bounty and famine, and forgave his brothers when they unknowingly came to him for help.  The most famous of Josephs is Donny Osmond, who played the role in Canada and the US in the 1990s.  There was a Q&A with some of the cast and crew after the show last night, and several people brought up the Donny Osmond version of the show.  I don't think anyone who does Joseph will be able to escape comparison, at least for the next decade or two!

Instead of Donny Osmond, our Joseph is Anthony Fedorov (who has come a long way since his Idol days).  I saw a preview of him singing "Close Every Door to Me" at Sample Night Live a few weeks ago; I was impressed then, and it's even better in context.  He has a strong voice, and looks and acts the part of the young innocent Joseph who grows to become the powerful assistant to the Pharaoh.  The part of the narrator may be the most difficult and largest role, and Jennifer Paz does a great job leading the audience through the story as well as corralling the children at times.

Most of the remainder of the cast is local.  The talented T. Mychael Rambo plays Joseph's father Jacob and several other roles, and the hilarious troupe of brothers is filled with local talent.  Their numbers include the country-style "One More Angel in Heaven," "Benjamin Calypso," and my favorite, "Those Canaan Days."  Jered Tanner really hams it up as Napthali.  The dancing is wonderful (the show was choreographed by director James Rocco, who is also Artistic Director of the Ordway), and the cast includes Chanhassen regulars and fine dancers John R. Sloan, Tony Vierling, and Julianne Mundale.  For the closing number of the first act, the rousing "Go, Go, Go Joseph," the cast is dressed in psychedelic 60s outfits and wigs that make the show look like an episode of Laugh-In.  There's even a disco ball hanging from the ceiling of the theater.  The curtain call includes a "Megamix" of songs from the show with everyone dressed in white, and colorful streamers spray out at the end of the show (see the blue and gold streamers on the playbill above).

With a run time of less than two hours including intermission, the Ordway's production of Joseph and the Amazing Technicolor Dreamcoat is a fast, fun, colorful, energetic show full of great performances from the large cast of professionals and children.  It's playing through January 2; check it out if you're looking for a light-hearted, entertaining night at the theater.