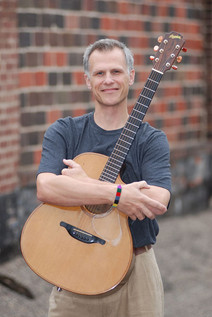 If you're looking for a place to hear "interesting, rich music" (as Peter put it last night), check out what's coming up at the Cedar.  Even if you've never heard of any of the artists, give it a try.  It will at least be, as Peter says, interesting and rich.  I've seen many great musicians the Cedar, who also seem to enjoy playing there.  It's located on Cedar Ave. in the West Bank area of Minneapolis.  Tickets are reasonably priced (usually around $20), and seats are general admission.  It pays to get there a little early if you like to sit up close like I do.  They sell food and drinks inside, and there's a great Thai restaurant next door.  Note: if you go in the summer (or spring, or fall, or pretty much anytime it's not freezing outside), it will be warm inside, so dress in layers that can be removed.

I've been a fan of Peter's for about ten years now, ever since I heard him on the dear, departed Morning Show on MPR (check out Radio Heartland for a similarly ecclectic mix of music, although without the witty hosts).  He usually plays one or two shows in the Twin Cities every year, and I go see him every chance I get.  He's one of the best guitar players I've ever seen live, and makes the guitar sound like I didn't know a guitar could sound (which might explain his charming obsession with tuning while on stage).  He writes most of his own songs, which are funny, touching, thoughtful, or just silly.  Some of his songs are spiritual, but in a sort of earthy way not tied to any religious tradition, which I appreciate.  I'm lucky enough to attend a church where he occasionally plays during services, which is always a treat.

The website Minnewiki: The Minnesota Music Encyclopedia offers this description of Peter:

Peter Mayer writes songs for a small planet—songs about interconnectedness and the human journey; songs about the beauty and the mystery of the world. Whimsical, humorous, and profound, his music takes you up mountains, across oceans, into space, and back home again. A native of Minnesota with a background in Theology, Peter is not big on love songs, but prefers delving into science, nature, and things spiritual.

Peter had two of his frequent collaborators on stage with him: Marc Anderson on percussin and Dan Schwartz on guitars/mandolin/back-up vocals.  Marc is an accomplished percussionist, and Dan is a talented multi-instrumentalist whom I've seen several times solo or with other groups.  When Peter had to stop playing the guitar for a year or two due to an injury, Dan took over the guitar-playing at all of his shows.

I didn't have my camera last night to capture any videos, so here's one from youtube.  This is my favorite Peter Mayer song, and probably his most well-know, "Holy Now" (at the Cedar in 2003 with Dan Schwartz).

Note: there are two talented singer/songwriter/guitar players named Peter Mayer, both of whom I love.  The other one is based in Florida and is a member of Jimmy Buffet's band.  So be careful when you're searching for Peter Mayer to make sure you have the right one!  Although you really can't go wrong with either.