"Billy Elliot" at the Orpheum 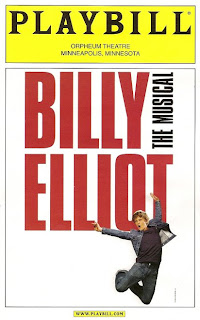 Some shows you go to for the music, some for the story, and some for the dancing.  Billy Elliot is definitely a show you go to for the dancing.  And also the great story about being who you are and expressing yourself in the way that you want, no matter what anyone else thinks.  The music, written by Elton John with lyrics by Lee Hall (who wrote the screenplay for the movie) is good, but is mostly there to facilitate the dancing.  The musical won several 2009 Tonys, including best musical (which should have gone to Next to Normal in my opinion), best direction, best choreography, and best actor for the three young men who shared the role of Billy.  I've wanted to see it for a while, but resisted because it was one of those ubiquitous movie adaptations, which I often find to be unimaginative and mostly about making money.  But Billy Elliot is the exception that proves the rule.  For one thing, it's not a huge blockbuster with a built-in audience (like Spiderman, for example); it's a sweet and funny little English movie.  Secondly, it's about dance and music, so it seems naturally suited to the stage (unlike, for example, Spiderman).  I loved the movie, and I think it has been successfully translated to the stage.

Billy Elliot takes place in Northern England during the coal miners' strike of 1984.  The whole town is on strike, and in the midst of this, an 11-year-old boy discovers dance.  After accidentally wandering into a ballet class populated by adorably awkward little girls (in some of the best performances of the show), he finds himself continuing to come back to dance class.  His teacher, played by the divine Faith Prince (she's guest-starred in numerous TV shows in addition to her successful Broadway career), discovers a talent in him he didn't know he had.  Billy's growing passion for dance is not initially accepted by his miner father and brother, but they eventually come to support him in his dream that will get him out of the dying mining business.

My favorite scene in the movie is when Billy, angry that he was forced to miss his dance school audition, is so overcome by emotion that he can't do anything but dance.  He doesn't know what to do with what he's feeling, so he throws it all into a dance through the streets of the town.  That scene also turns up in the musical, and is equally well done.  Billy screams and dances to a song called "Angry Dance" as the miners strike and the cops patrol.  In another scene, Billy dances a beautiful balletic dance shadowed by his older self, played by the incredible ballet dancer Maximilien Baud.  They dance together in joy, and Billy flies through the air, finding freedom in dance.

Another sweet subplot in the movie that's well replicated is about Billy's friend Michael, played in this performance by the charismatic and talented Jacob Zelonky, who likes to dress up in women's clothing.  He convinces Billy to try on a skirt, and they sing and dance about how there's nothing wrong with "Expressing Yourself," even if that means wearing a dress.  Several dresses come to life and dance with the boys, who are wearing glittering tap shoes and are surrounded by a shining backdrop.

As I mentioned before, the ballet girls are some of the best performers in the show.  Ranging in age from about 8 to 14, they play girls who are learning ballet in a small town with varying degrees of success.  They're rowdy little girls who love to push each other and make faces, and even occasionally swear!  They look so comfortable and natural up on stage; each and every one is a star in the making.  In one brilliantly choreographed scene (the show was choreographed by Peter Darling), the ballet girls dance in and out amongst the striking miners and the cops, as they continue to discuss what's going on, seemingly oblivious to the fact that they're twirling and lifting a little girl in a tutu.  It's a fascinating juxtaposition.

Another one of my favorite scenes (there's just so much to talk about in this show!) is when Billy asks his somewhat senile grandmother about his grandfather.  You might expect a touching story, but not in this show.  Instead, Granny tells Billy how her husband was a bastard who hit her.  But in the evening, "We'd Go Dancing," and everything was magical.  If she had it to do over again, says Granny, she'd enjoy her life and not be someone's wife!  As she's telling the story, the versatile men in the ensemble quietly come on stage from the right, and slowly move towards Granny and Billy until she dances and fights with them, and then continue gracefully past and out the windows on the left.

But the star of the show is, of course, Billy.  There are five Billys touring with this production, taking turns playing the role.  The Billy I saw is 14 year old Daniel Russell from Australia.  An amazing dancer, a great actor (I had tears in my eyes when Billy read a letter from his deceased Mother), and not a bad singer.  I'm so impressed by him and all the kids for the performances they give and the focus and discipline they must have to tour with this show at such a young age.  I'm inspired to look into the possibility of taking dance classes (better late than never), but in the meantime, I ordered a ticket to the James Sewell Ballet at the Southern Theater next year.  I'm not sure that I've ever been to a ballet, and judging from the little I've seen, I'm sure I'd love it!