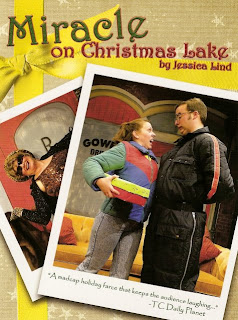 A small regional theater is preparing for their Christmas play when the rights are unexpectedly pulled.  They have to scramble to pull together a new production in a short period of time.  This is both the plot of Miracle on Christmas Lake and the true story of how Yellow Tree Theatre developed the play two years ago in their inaugural season.  They were all set to do Jacob Marley's Christmas Carol when they were told they were granted the rights by mistake and could no longer do it.  Since one of the founders of the theater, Jessica Lind, is a playwright, she wrote a new play and chose to base it on what they were going through, although with many fictional and wacky additions.

Miracle on Christmas Lake is set in the fictional town of Christmas Lake, Minnesota.  Colin (Stuart Gates) inherited the town theater from his father and moved home from New York City with his wife Tess (Carolyn Jensen) to run it.  Colin left a semi-successful acting career in NYC, including a role on the fictional soap opera As Time Ticks On.  (Coincidentally, Jessica and her husband Jason Peterson, director of this production and Artistic Director of the theater, had also spent time in NYC before moving home to Minnesota to open the theater, and Jason appeared on the dear departed soap As the World Turns.)  Colin calls all of the actors in the cancelled production, It's a Wonderful Life, for an emergency all-night brainstorming/rehearsal session, but only the oddball Martha Knutson (Jessie Rae Rayle) can attend.  She brings along tator tot hotdish and her pet bearded lizard, named Katherine after her grandmother.  Martha is a caricature of Minnesota and seems to be stuck in the 80s judging by her high-waisted acid washed jeans and moon boots.  Jessie, who also appeared in String this fall, gives a fearless performance, contorting her face and invoking a crazy laugh and funny posture.  Piano tuner Neil (Ryan Nelson), who has an understandable obsession with Little House on the Prairie and Michael Landon, is roped into joining the new production.  After a failed attempt at trying to extract something interesting from Martha and Neil, Colin decides to act out an episode of As Time Ticks On to appeal to their chief benefactor, Mrs. Burlington (Diana Wilde, who also plays Colin's mom), who's a big fan of Colin and the show.  They also give her a part in the play.

The main character in As Time Ticks On is Victor Icon of Icon Enterprises, an obvious nod to Victor Newman from the number one soap, The Young and the Restless, who is most certainly a soap icon (even though he's a manipulative greedy bastard ;).  There's also a character named Marlena (Days of Our Lives).  Plot points include sperm switching, affairs, evil twins, and being buried alive, all soap staples.  The play begins, and chaos ensues.  The lizard Katherine has gone missing and Martha is beside herself.  Neil is only comfortable when using someone else's voice, from Bill Clinton to Marlon Brando to my favorite, Jimmy Stewart.  Mrs. Burlington has a hideous hairy mole on her chest, and Tess is forced to do an awkward Colombian accent.  The show falls apart, and Tess tries to save it by singing perhaps the most melancholy of Christmas songs, "Have Yourself a Merry Little Christmas."

The show is a disaster, and Colin is sure he's going to have to sell the theater and move back to NYC, something Tess thought she wanted until she sees how much the theater means to Colin.  But it turns out people loved the show; Mrs. Burlington comes through with her donation and they sell out the performance for the next night.  Like in The Producers, the show is so bad it's good!  Tess and Colin decide to stay in the little Minnesota town and make a life and a theater there.  I, for one, am glad that Jessica and Jason made the same choice.  While this fall's String was more my style, Miracle on Christmas Lake is a funny, silly, campy show with great performances that makes for an entertaining evening.  It pokes loving fun at everything from tator tot hotdish to lutefisk to soap operas to Little House on the Prairie.  I continue to be impressed with Yellow Tree and am looking forward to their upcoming productions, Our Town and the musical [title of show].