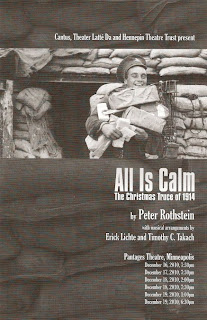 All is Calm is the annual Christmas show by Theater Latte Da, my favorite local theater, and, inexplicably, this is the first time I've seen it.  In it's third year, the show was written by Latte Da Artistic Director Peter Rothstein (with musical arrangements by Erick Lichte and Timothy C. Takach) about the World War I Christmas Truce of 1914.  Soldiers on both sides (German and Allied troops) spontaneously decided to stop shooting at each other for one day, and walked out into "no man's land" to sing songs, play games, and share photos of loved ones.  All is Calm tells the story of these men through music and their own words.

I'm not sure whether to call this show a concert, a play, or a musical.  It's really a lovely combination of all three.  In a message from Peter Rothstein in the playbill, he says, "I'm interested in creating performance where the content dictates the form" (something I believe I've also heard Stephen Sondheim say).  The show is constructed from quotes from soldiers' letters and journals, as well as articles written about the truce.  Three actors recite these quotes in a colorful variety of British accents.  Interspersed among the quotes are songs by the male vocal ensemble Cantus, who sing traditional Christmas carols and army songs.  Peter was inspired to collaborate with Cantus when he saw one of their concerts and realized that "their work was pushing the boundaries of chamber music in the ways Theater Latte Da was pushing the boundaries of musical theater."  It's a beautiful collaboration; at times it's hard to distinguish the actors from the musicians.  They're all dressed alike in black coats and sweaters.  As the story moves into winter of 1914, they all gather their scarves a little tighter, pull hats and gloves out of their pockets, and button their coats.  The singers act the part of the soldiers leaving their homes and families with excitement, expecting to return soon, only to be caught in a brutal, cold, long war.  The truce is a short break in their weariness, and gives them hope, at least for a moment.

I think this show is less about Christmas or any specific holiday, than it is about the realization that we're more alike than we are different.  The people we are fighting against in any war are really not that different from ourselves.  They want to be home with their families and live a peaceful, happy life, just like we do.  It really is a lovely thought - what if the armies of both sides went on strike, would we find another way to settle our differences?  Idealistic maybe, but something to think about.