"Next Fall" at the Jungle Theater 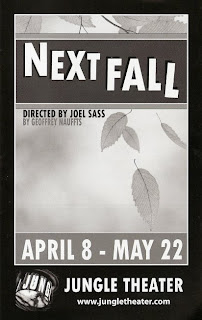 Next Fall is one of those plays that will make you laugh, cry, and reevaluate what you think about certain issues (which happens to be my favorite kind of play!).  Directed by Joel Sass at the Jungle Theater, Next Fall tells the story of two gay men in a committed relationship whose lives change irreversibly when one of them is involved a freak tragic accident.  The play begins in the waiting room of the hospital, where Luke's friends and family have gathered as he lies unconscious in his hospital bed.  The story of Luke and Adam's relationship is told through flashbacks, which alternate with present-day scenes in the hospital.  Luke and Adam love each other and have made a life together, despite very different worldviews.  Luke is a devout Christian who believes in heaven and hell, while Adam is an atheist who can't understand how Luke can continue to believe despite what his faith has to say about homosexuality.  Somehow Luke is able to reconcile that contradiction, something his Christian friend Brandon can't accept.  But both Adam and Brandon start to rethink their opposing positions when faced with the possible loss of someone important to them.

Luke's southern Christian parents are also there in the waiting room, and neither one knows that Luke is gay and living with Adam.  Luke has always been afraid to tell them, despite Adam's urging to do so.  When it comes time for decisions to be made about Luke's care, his parents are legally responsible, and Adam has no say.  When Adam's relationship with Luke comes to light, there are some tense moments, but in the end, they realize that they all love Luke, and begin to listen to and comfort each other.

OK that sounds really depressing, but there are also quite a few humorous moments as we watch Luke and Adam's relationship unfold through flashbacks.  And Luke's eccentric mother (Maggie Bearmon Pistner) provides many humorous moments as she interacts with the others in the waiting room.  It's a "laugh through your pain" kind of show.

Garry Geiken (whom I saw recently in Latte Da's Song of Extinction) gives a funny and heart-breaking performance as Adam, and Neal Skoy (in his Twin Cities professional stage debut) is quite charming as Luke.  Stephen Yoakam (who was recently named best actor by City Pages for his performance in Who's Afraid of Virginia Woolf at the Jungle last year) allows Luke's father's deep feelings for his son to peek through his tough exterior, and has a wonderfully subtle and believable accent.

Luke is an actor, and his family and friends keep talking about his performance in the play Our Town a few years ago (which fortunately I saw recently at Yellow Tree, so I understood the reference).  The theme of Our Town is that people don't usually appreciate life to its fullest until it's over.  Next Fall has a similar theme.  It's a play about loss and regret, but also about love and togetherness and living the life you want to live.


*A note to my fellow theater-goers.  Please make sure to turn off your cell phone when you enter the theater.  And then double-check to make sure it's off.  And if you don't know how to turn off your cell phone, don't bring it into the theater!  At a crucial moment during the play, someone's cell phone went off, which totally took me out of the moment.  It was very distracting and disappointing.  I wanted to reach for my remote and rewind a few minutes and watch that scene again!  So please, friends, make sure your phones are off!  Thank you.