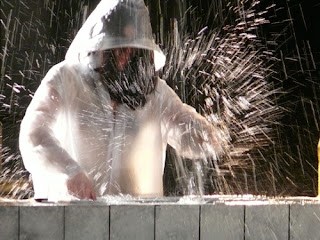 Come Hell and High Water is the third show of my Southern Theater season, which includes four plays I’d never heard of by small local theater companies unknown to me. Like the previous shows in the season (Theatre Novi Most’s Oldest Story in the World and Four Humors Theater’s Age of Wordsworth), Come Hell and High Water is not your typical evening at the theater. All of these shows stretch the definition of theater and play with music and movement as storytelling devices. This is what makes theater fun for me.  I never know just what to expect when I go to the Southern Theatre, but I'm always delighted and surprised by what I see.

Come Hell and High Water is a production of a new theater company called The Moving Company ("we do theatre"), founded by Steve Epp and Dominique Serrand of Theatre de la Juene Lune, which closed its doors in 2008.  Sadly, I was only just beginning to become aware of all of the amazing and varied theater companies in the Minneapolis/St. Paul area at that time, so I never saw a Jeune Lune production, for which I am now kicking myself. But hopefully a bit of their spirit lives on in this new company.  Their mission is "to create and produce new and challenging theatre that builds on the past, is grounded in the present, and looks to the future. To maintain and nourish an atmosphere for the development of new ideas."

Come Hell and High Water is an adaptation of William Faulkner’s novella Old Man. Steve Epp (who I’ve seen twice previously this year, in The Homecoming at Center Stage in Baltimore, and recently as the title character in Ten Thousand Thing’s Man of La Mancha) adapted the story and plays the old man. As the play opens, the "old man" wanders in from the street, recently released from prison in New Orleans on the brink of Hurricane Katrina.  He begins to recount his experience as a prisoner during the Great Mississippi Flood of 1927 (the most destructive river flood in US history).  Nathan Keepers plays his younger self, and both actors are onstage for the majority of the 90 minute show. Steve and Nathan do a wonderful job of playing one character, often completing each others sentences or speaking in unison, and adopting the same voice and mannerisms. By the end of the show I felt like they were one person.  Back in 1927, the old man is a young man in prison for attempting to rob a train. When the flood comes he’s given a boat and told to rescue a woman in a tree and a man on a roof. He never finds the man, but he rescues the very pregnant woman.  She gives birth as they float down the river to New Orleans.  It’s a transformative event in both of their lives.

This production features beautiful and eclectic music. Most of it is music of the time and place, a traditional Americana sound (which I love). Other than voices, the only instrument is a guitar played by Per Halaas.  Christina Baldwin is responsible for the music arrangement and also plays the woman in the tree. She has an incredible range, both in the notes she can sing and in the styles of music she can sing. I’ve seen her in such diverse shows as Gilbert and Sullivan’s Pirates of Penzance at the Guthrie (one of my all-time favorite Guthrie shows) and Grey Gardens at the Ordway, in which she played Little Edie. In this show she sings everything from "Peace in the Valley” to a classical piece. The ensemble of about a dozen people, curiously dressed as a priest, a mailman, and other seemingly displaced characters, provides the musical backdrop and witnesses the story unfolding. They also play with water, at times making music with it. At the end of the show water rains down on the Southern Theater, and it’s a beautiful release.  (No need to bring an umbrella, the audience doesn't get wet. ;)

As I mentioned, there's water on set, in bins set into something like kitchen counters. There's also a refrigerator on stage, and everything has a water mark a few feet above the ground as if it had been through a flood. One of my favorite parts of the set is a sort of teeter-totter – a wooden plank balancing on a stack of sandbags. It serves as a boat for part of the story, and the convict and the pregnant woman perform a magical balancing act that looks effortless and graceful.  But I imagine that it took hours of rehearsal to get it that way!  Another unique feature of the show is a deer played by dancer Katelyn Skelley with all the skittishness and grace you'd expect in a deer.  Why there's a deer in the flood I'm not sure, but it adds another unique and beautiful element to the play.

This show is a timely piece with the recent flooding along the Mississippi River (was there ever a time when the Mississippi didn’t flood?). Come Hell and High Water uses water and floods as a way to explore themes of the past, regret, racism, hope, and hopelessness. As the old man says in the opening line of the show, “The past is never dead. It ain’t even past. It’s just there… same as a river.” This is a really beautiful production of a new work that’s inventive, surprising, moving, entertaining, and a pure pleasure to watch.